The game proved to be a tight encounter between two very evenly match sides, with little clear cut chances during the opening exchanges. The only real half chance fell to the Warriors in the 5th minute as Orr shot high and wide from around 15 yards out after the ball was cut back to him by Thomson.

It should have been 1-0 to the Warriors however, just before half time as Thomson slipped through James Lyons on the counter attack to create a 2 on 2 with Orr to his side. Lyons was able to beat the first defender, only for the second to get enough of a challenge in to prevent him from squaring it to Orr and the Binos were able to scramble it clear. It remained 0-0 at the break.

The 50th minute saw Dale Carrick almost score the goal of the season for the visitors as he attempted a Rooneyesk overhead kick from a McGeachie cross but his effort went slightly over the bar.

Stirling did take the lead in the 72nd minute after Laird played a one-two with Leitch on the right hand side to drive into the box unopposed and square the ball to McNiff who tapped the ball home from 2 yards out. It was a good move from the Forthbank side but the ease at which they were able to advance into the box will be disappointing for the Warriors defence.

It was nearly 2-0 nine minutes later as Moore drove at the Warriors backline and struck a powerful effort low that struck the inside of Marshall’s post, only to rebound and spin out for a goal kick on the opposite side.

Dylan Mackin was sent off in stoppage time for something he said to the referee after not receiving a freekick after feeling as though he was fouled. Despite this, Stirling were still able to withstand strong Warriors pressure late on to secure the victory and take home all 3 points. 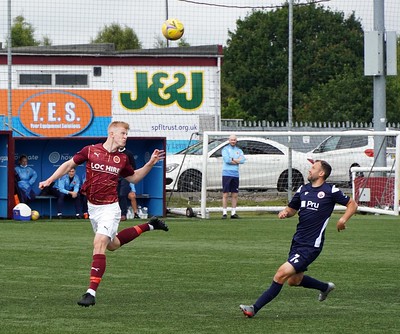 View our Match Gallery on