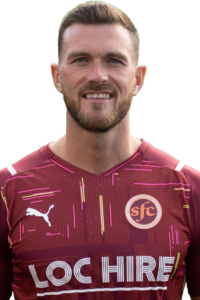 Sean Crighton (born 26 March 1990) is our club captain and plays as a central defender. Crighton began his career with St Mirren, and has also played for Montrose, Elgin City, Greenock Morton, Airdrieonians, Livingston and Brechin City.

Crighton began his career as a youth player with Scottish Premier League club St Mirren, spending a season on loan with Montrose before moving permanently to the club in June 2009.

After three years and almost 100 appearances, Crighton left Montrose to sign a two-year contract with Elgin City in 2012, spending two seasons with the side before being released at the end of the 2013–14 season.

Crighton subsequently signed for hometown club Greenock Morton in June 2014, helping the club win Scottish League One. Crighton was released by Morton shortly after the league win, moving east to sign with Airdrieonians after just a month without a club.

After his spell with the Diamonds, he signed for a season with Livingston where he captained the club to the League One title, before joining newly promoted Scottish Championship side Brechin City in July 2017. Crighton left Brechin at the end of the 2017–18 season.

On 3 May 2018, Crighton agreed a deal to return for a second spell at Airdrieonians, remaining with the club until May 2021. He then signed for Stenhousemuir.

In April 2018, Crighton was promoted to head of the academy pathway at Greenock Morton. He left his role in August 2019, to take up coaching positions with the Airdrieonians first team and the Hamilton Academical youth academy.