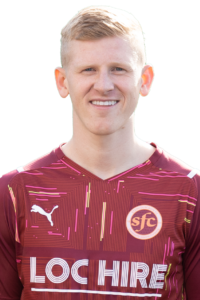 Nicky Jamieson joined the club in August 2021 and plays in centre defence with the number 25 jersey.

He spent five years at Largs Thistle, before playing for Queen’s Park and Alloa Athletic for one season each.

Jamieson spent the first five years of his career at Largs Thistle after leaving the Greenock Morton youth academy. During his five years at the club Jamieson made over one hundred and fifty appearances for the Junior side.

In June 2019 Jamieson completed a move to Scottish League Two side Queen’s Park, in his only year with ‘The Spiders’ he made the league’s Team of the Season.

On 22 July 2020 Jamieson signed for Scottish Championship outfit Alloa Athletic ahead of the 2020–21 season.

At the conclusion of season 2021-22 Jamieson was named as Stenhousemuir Player of the Year.