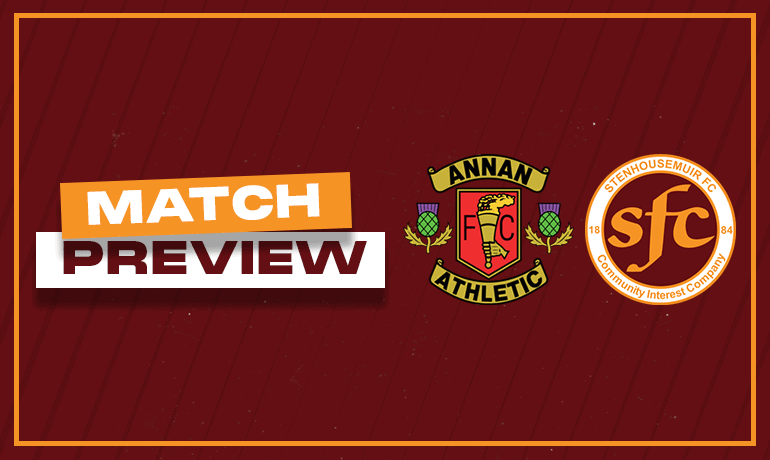 Next up for The Warriors is a trip down the M74 to on form Annan Athletic.

Annan have been on good form as of late, undefeated in their last 11 matches including a 5-1 demolition of Kelty Hearts. The last team to beat them though, was Stenhousemuir and The Warriors will look for back to back victories and haven’t lost an away match since our visit to Kelty back in November.

History in this fixture has been favourable to The Warriors. With 9 victories from the 23 competitive matches and undefeated in the last 3.

Nicky Jamieson and Ross Lyon should both be in contention for returns this week. One player that will miss out is Jordan Tapping, who begins a suspension for his red card last week.

Before the match, Warriors TV spoken to Stephen Swift

First thing, you’ve been unavailable with COVID, how have you been feeling?

I’ve been feeling good and haven’t had many symptoms at all really, but it’s just the way it is unfortunately. I’m still testing positive though which is ruling me out for Saturday, which is disappointing.

WIth you not being available for training, how much contact has there been with your coaching team?

There’s been plenty of contact. I’ve spoken with Frazer and Mick every day and we’re working on Saturday’s plan and been talking to the in regards to what we want from training this week. Also had a Zoom call with the players on Thursday night, such is the technology, so it’s really good having contact with the players which allows me to share the game plan for Saturday. So everything is good and the boys are prepped as much as we can.

With Swifty absent, Frazer Wright will take charge again on Saturday, looking to double down on his 100% win rate! We spoke to Frazer after Thursday night’s training session.

With Swifty being unavailable, how has that affected your role in the last week?

It’s not really affected my role that much in the last 2 weeks. I’ve still had him on the phone all time, planning the sessions. The main change is that I’ve been the one taking the sessions, with the help of Mick and Stephen, rather than the manager taking the majority of the training and me helping him out. So that’s really the biggest change.

We’ve got a 100% win rate over Annan this season, what are we expecting from them this time around?

We’ve got a good record of Annan this season. We were probably a bit lucky to get the win down there at the start of the season, but that was our first win and we were hoping to kick on from there, but it’s not quite worked out. We then beat them at home, with a clean sheet, oe of our few clean sheets, when we were on our good run. They’re on a good run themselves, only losing 1 game in 15, so it’ll be a tough game and we know they have their strengths. They have Johnson out wide and Moxon in the middle, so if we can nullify them, and play to our strengths, hopefully we can end their good run.

How has training differed this week without the gaffer?

Training’s not really differed form what we normally do. It’s still been a high tempo and high intensity. We’ve probably not done as much work on Annan without the manager there, but he did a zoom call before training tonight outlining what he’s expecting and what he wants from Saturday. So I’ll just take that into the talk before Saturday’s game, and we’ll be prepared as normal.

How are the boys looking this week? We know Tappz will be suspended, are there any other players likely to miss out?

Boys are looking good, Tappz is suspended and he’s the only one missing out, aside from Graeme Smith. Graeme will be on the bench, giving us an extra voice as he did on Saturday with the gaffer not being there.

Finally, has this week given you a thirst for being a manager, rather than an assistant manager?

Not really, I’ve enjoyed it and it’s been a wee bit more responsibility in stepping up and being more of a voice in the dressing room and leading the boys more. But I’m very happy being an assistant manager, that’s my role and I’ve no real plans to step up to being a manager, but you never know what will happen in football. But right now, I’m very happy being the assistant.

Match Entry: Tickets can be purchased via the FanBase App

Live Stream: If  you can’t make the match, you can watch the match live via Annan’s PPV service.

Getting Here: Click here for details of how to get to Galabank by car or train.

Supporter’s Bus: We are running a bus to Annan and you can contact Andy McPhate on Twitter for availability.