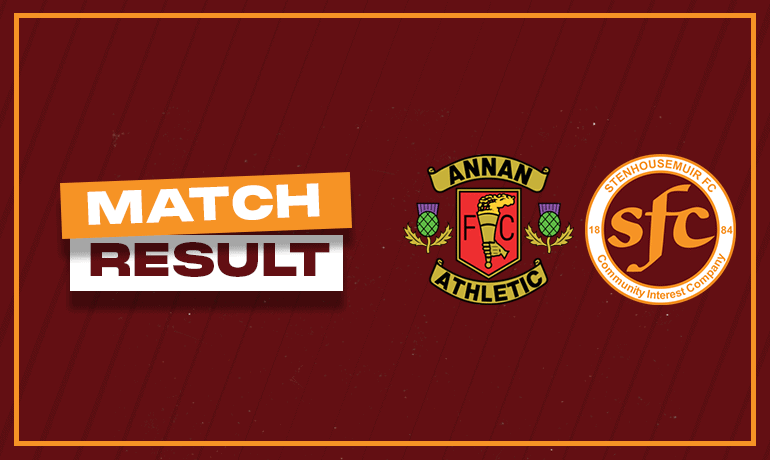 The Warriors continued their winning ways against Annan with a 2-0 victory at a very wet and windy Galabank.

Annan started off strong and Stenhousemuir struggled to get the game under control. It took the visitors a good 13 minutes before their first free-flowing attacking move of the match, although they failed to test Fleming in the home goals.

The Warriors then spent next 10 minutes causing their own problems as they struggled to pass the ball out from the back, gave away some silly free kicks, but ultimately the defence stood tall and Annan struggled to break down the stubborn wall.

Sean Crighton then set up the next Stenhousemuir attack with a simple ball over the top. Tam Orr was the target and controlled the ball perfectly before turning, driving forward and getting his shot away, though Fleming was untroubled.

Annan had a strong penalty appeal on 26 minutes minutes as, it looked like, Tony Wallace felt he was fouled in the box. The Ref wasn’t interested though and waved away the penalty claims.

GOAL: Before today’s match, Tam Orr had scored all of The Warriors previous 5 goals and he made that 6 on 31 minutes. It has to go down as a keeper error as his shot seemed to be under control, but ended up in the other corner of the goal. They all count though and Tam picked up his 14th goal of the season and moves up to 2nd in the league scorer chart. Annan Athletic 0-1 Stenhousemuir [31 minutes]

There wasn’t much action after the goal, but Annan continued to push for an equaliser, but aside from a 2 saves by Urminsky, the big Slovakian wasn’t tested much.

Annan started the 2nd half on the front foot and picked up a few corners inside the first 5 minutes.

GOAL: Mikey Anderson’s long throws were causing issues, and one in particular was headed out by Swinglehurst for a corner. The corner was swung in and ended up with O’Reilly, his floated cross was met by Nicky Jamieson who powered home a header from close range. Annan Athletic 0-2 Stenhousemuir [55 minutes]

It wasn’t long before Annan had their next attempt. A deep cross was met in the box, but the header was plucked out of the air by Peter Urminsky who was at full stretch to pull it out of the sky.

Annan continued the pressure, but again failed to cause any issues as the Warrior’s Wall stood firm. Nicky Jamieson was on the receiving end of a very rough tackle by Moxon. The referee judged it to be a yellow card offence, but I don’t think the talented midfielder could’ve complained if the punishment was more severe.

Annan were throwing everything at The Warriors in an attempt to get back into the game. Their next attack seemed to be saved by Urminsky, and although the ball got past the big Slovakian, Callum Yeats was there to complete the clearance off the line.

SUBSTITUTION: Big Thomo was replaced by Daz Christie as Frazer Wright looked to freshen up his pack. [74 minutes]

Chances came few and far between as The Warriors looked to hold onto their lead.

SUBSTITUTION: Tam Orr seemed to have picked up a knock at some point and his afternoon was over. He hobbled off and was replaced by Ross Forbes. [86 minutes]

PENALTY: As Annan were desperate to get back into the match, they were driven into the box. Michael Anderson looked to have gotten on the wrong side of the attacker and his foul resulted in a penalty to the home side.

SAVED: For the second weekend in a row, The Warriors’ fans witnessed a penalty save. This time, it was Peter Urminsky, who has a fantastic recored at saving penalties, made the block with his leg. Fantastic save by the big man to preserve a well deserved clean sheet. 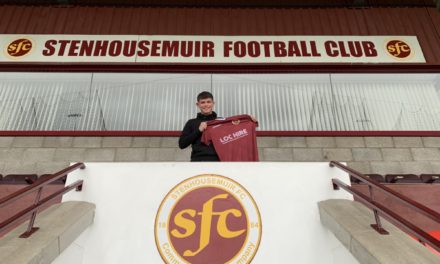