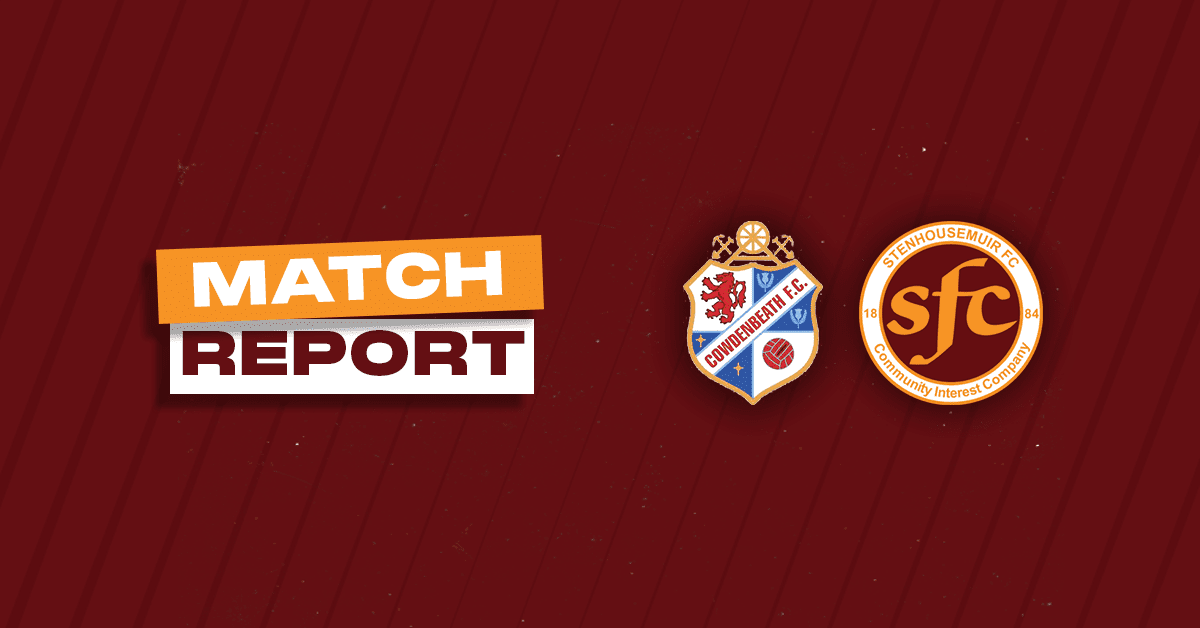 Stephen Swift made 1 change from the team that started against Edinburgh last week.

Ross Forbes is added to the starting 11 and The Warriors will look to get the best from his experience with Mikey Anderson dropping to the bench.

Euan O’Reilly’s return from injury is almost complete and he starts on the bench.

Cammy Graham misses out due to a covid related issue.

The game was slow to get underway and it was Cowdenbeath that collected the first corner of the match inside 4 minutes. Ross Forbes was able to header away the ball with Nat Wedderburn completing the clearance.

The Warriors picked up a free kick halfway inside the hosts half. Ross Forbes swung it in but it failed to clear the first defender. The visitors have yet to find their feet in this match with Cowdenbeath having most of the first 10 minutes which culminated in another corner which resulted in a free header, but was well over.

It took 11 minutes for the visitors to have their first shot on goal, but Adam Corbett’s shot was well over after a back post knock down by Sean Crighton which was tee’d up by Robert Thomson.

The first 15 has seen Cowdenbeath with a lot of the ball but their long balls over the top are causing no issues for the Stenhousemuir defence.

21 minutes into the match and the referee pulls out his yellow card for the first time. Robbie Buchanan is the recipient after a late foul n Robert Thomson. Ross Forbes flighted the resultant free kick towards the back post to Sean Crighton but the captain was penalised for climbing over the home defence.

Cowdenbeath picked up their second yellow card in 32 minutes when Andy Barrowman bundled Callum Yeats to the ground just inside the home half. Ross Forbes again floated the ball in, but another free kick is given for the challenge by Tam Orr.

Another foul and anther yellow card for the home side. This time Fraser Mullen is booked for a cynical foul n Ross Forbes on 35 minutes.

Overall, a very poor 45 minutes from both sides.

No changes for either side at half time as Tam Orr gets the 2nd half underway.

The first chance of the half came to the home side as they picked up a free kick 20 yards from goal. Fraser Mullen’s drive went straight into the wall and summed up the game same so far.

Big Nat was inches away from getting his first goal for The Warriors with the game’s first real bit of magic. The big man turned and volleyed a clearance from 20 yards out, but was agonisingly over.

The Warriors are starting to turn the screw now as back to back corners cause chaos in the home box but eventually the ball goes out for a goal kick.

Cowdenbeath make the first change of the match with Sam Ompreon replacing Quinn Coulson on 52 minutes.

Stenhousemuir’s next chance came up on 61 minutes, but Mikey Miller fired well over the home goal.

Cowdenbeath almost broke the deadlock on 63 minutes with an in swinging corner. The header went marginally wide of Urminksy’s goal. They came even closer just a minute later with Urminsky doing well to parry, then hold a stinging shot.

Cowdenbeath had another good chance on 71 minutes with Ompreon forcing a good save from Urminksy as he was one on one with the big keeper.

Just as Cowdenbeath prepare for their 5th corner the match, they make a change with Aikamhenze coming on for Andy Barrowman.

Another fine save by Urminksy as Aikamhenze was through one on one. Again, the big keeper stayed tall and saved the shot.

BOOKING: Peter Urminsky is booked and gives away a penalty for bring down Aikamhenze in the box.

GOAL: Fraser Mullen drives the ball down the middle to give the hosts the lead. COWDENBEATH 1-0 STENHOUSEMUIR [79 minutes]

SUBSTITUTION: O’Reilly and James Lyon look to add some creativity to the match as they replace Ross Forbes and Callum Yeats. [82 minutes]

Into injury time and it was last chance saloon with a long throw by Adam Corbett making its way to the back post. Daz Christie popped up and headed the ball back across goal and into the far corner. 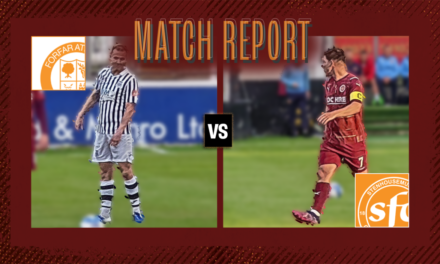 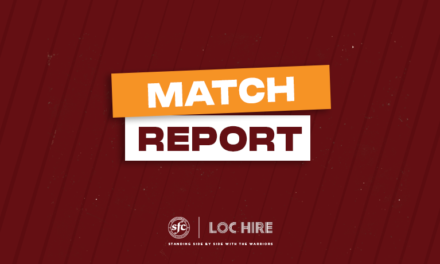