The Warriors welcome Elgin City to Ochilview following a week off.

Elgin come into the match on red hot form after an impressive 2-0 victory against Kelty Hearts.

Our recent Head to Head has been a mixed bag with 4 wins a piece in our last 10 meetings with 2 draws.

The sides have met each other 35 times with 14 victories for Stenhousemuir, 17 for Elgin City and 4 draws. The Warriors are slightly better off on the goal front, with 58 goals for and 56 against.

Stephen Swift could have a full squad to select to for the first time since his move in the Summer with both long term absentees Robert Thomson and Graeme Smith returning to full training albeit with the latter unlikely to be ready for match action.

A win for either side could see them move into 4th place with only 2 points separating 4th placed Edinburgh City with 8th place Elgin City.

Following last weekend’s postponement, we can confirm that the match has been re-scheduled for Wednesday 2nd March with a 7.45pm kick off

Unfortunately, it’s a bit more of the same as our match with Kelty Hearts on 12th February has also been postponed due their progression in the Scottish Cup. A new date has yet to be set for this fixture.

After a short spell helping as an opposition scout, Gary Sibbald has officially joined the Club. Warriors TV caught up with Gary last week, and you can see what he had to say HERE.

Our Ladies team continued their recent good form with a 5-0 victory against BSC Glasgow with goals from Montgomery, Paterson, Lauder, Wyatt & Vickerman!

The result puts the Ladies up to 10th in league and play Falkirk, Morton and united Glasgow before the League splits.

Next up, the Ladies welcome local rivals Falkirk Women to Ochilview, looking for their 4th consecutive win.

The match is played on Sunday 30th January with a 2.30pm kick off.

Tickets for the match are priced at £5 for adults and are available here. Under 18s can enter for free with a paying adult.

PPV will be available on Warriors TV, keep an eye on the club’s social channels this week for full details.

Our after school football programme is fast selling out, so book now! 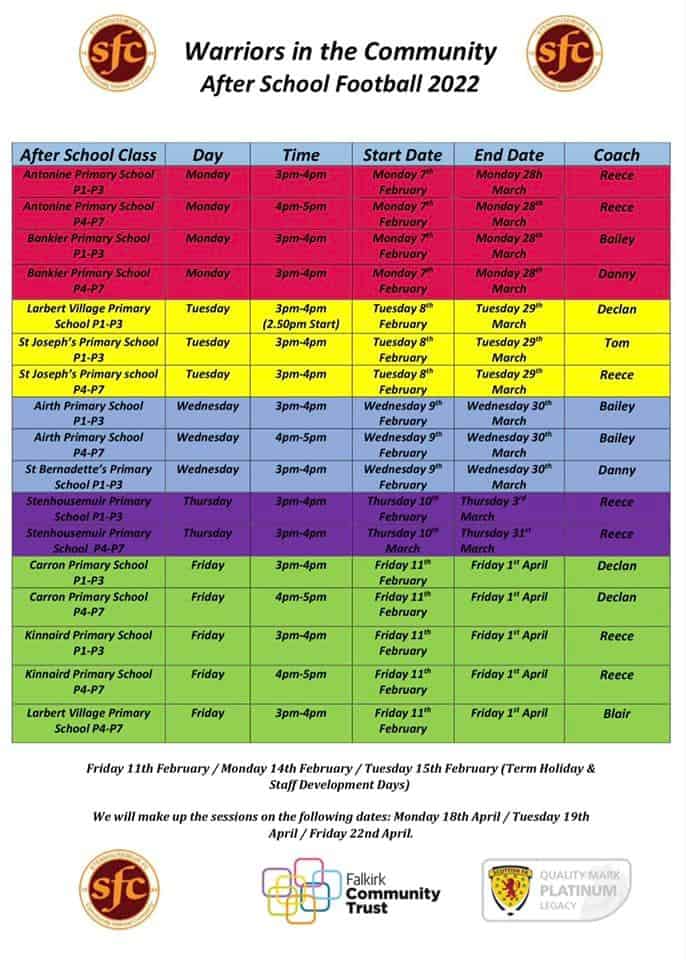 Premier League clubs will have to prove they have at least four Covid-19 cases to get matches called off under new guidance announced on Wednesday.

A total of 22 top-flight games were postponed in December and January because of the pandemic.

The rules will be introduced before the next league fixture on 5 February.

A Premier League statement said the rules are designed “to protect the wellbeing of players and staff” and “maintain the sporting integrity”.

Former Stenhousemuir goalkeeper Matthew Gould has realised another dream by being named in the New Zealand All Whites squad for two matches in Abu Dhabi and Dubai next week.

Born in England and the son of Napier-based former Scottish international Jonathan Gould, Matthew was on loan at Ochilview from Livingston in 2015/16.

He has been called up to replace 27-cap All White Stefan Marinovic, who has withdrawn from the men’s national team squad ahead of the games against Jordan and Uzbekistan.

The matches are part of the build-up to the All Whites’ World Cup qualifying matches against Papua New Guinea, Fiji and New Caledonia in Qatar in March.

Gould has been playing for English club Altrincham FC since 2020, and will join a squad which still has goalkeeping strength in existing squad members Michael Woud and Jamie Searle.

In 2010, at the age of 17 and a student at Lindisfarne College, Hastings, Gould was called into a New Zealand Under-17 squad.

Marinovic has tested positive for Covid-19, despite being fully vaccinated, and has not travelled to join the side in Abu Dhabi.