The club is delighted to announce Stephen Swift as our new first team manager. Stephen will take over at the club with immediate effect and will be in the dugout for our final 2 fixtures of the season before beginning preparations for next season’s campaign.

Chairman Iain McMenemy said, “Stephen has built himself a very positive reputation as a modern, progressive manager that can lead and inspire a team to success.  He has a strong focus on strategy and tactics, and we believe this will really enhance our ambitions as a club.

“We have spent the last couple of years building a modern, resourced football department at Stenhousemuir that is able to support the management team in terms of recruitment and play.  We see Stephen’s appointment as a crucial part of our efforts to take the club forward.

“I would like to thank BSC Glasgow, and George Fraser in particular, for their professionalism as we have worked through the recruitment process.

Stephen Swift said, “It’s with a heavy heart that I say goodbye to the staff, volunteers and players at BSC Glasgow.  The club has been a huge part of my life for the last 4 years and I’m grateful to have had the privilege to work with them.

“It’s time to look at the next opportunity, and I’m really excited to come on board at Stenhousemuir FC.  I believe this club has the potential to be one of the best part-time professional teams in the country.  It’s a great opportunity for both myself and my coaching staff and we can’t wait to get started.”

We know that Stephen is our new manager, but what else do we know about the gaffer?

The 40 year old was initially a right back in his playing days, with a wealth of experience in both the senior and non-league game. His most notable spell came at Stranraer where he played 126 games, winning both the 3rd Division and promotion to the 1st Division in his time there.

After retiring from playing in 2012, Stephen was appointed co-manager of now West of Scotland League side, Kilbirnie Ladeside. After becoming the sole manager in 2015, he led the side to win the Ayrshire Sectional League Cup in 2016 and stepped down shortly afterwards.

Stephen continued his close involvement in football through a coaching stint at Largs Thistle, after which he then stepped back into the managerial hotseat in 2017, as he took over at BSC Glasgow.

It was at BSC where Stephen really began to show off his managerial credentials as he transformed the side into a force to be reckoned with in the lowland league. In his first 2 seasons, BSC narrowly missed out on a promotion playoff spot after finishing 2nd and 3rd place in the division. In addition, Stephen was able to win the Lowland League Cup for only the first time in the club’s history. Despite this, perhaps Stephens most notable achievement whilst at BSC was reaching the 5th round of the 2019/2020 Scottish Cup, only going out to a strong Hibernian side in front of the BBC Scotland cameras.

There is no doubt that Stephen has the experience behind him to make his step into SPFL management with the Warriors a success. Everyone at the club wishes Stephen well in what is an exciting new chapter for everyone involved. 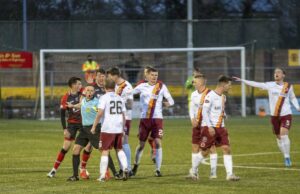 Tuesday night saw a massively improved performance by the Warriors upon their return to Galabank, as the boys fought back from behind to secure a 1-1 draw. The Warriors had the better of the early chances in what was a tight first half, coming closest on 37 minutes when the ball smashed off the Annan crossbar. After a goalless first half, our hosts did make the breakthrough on the 50th minute when the ball fell to Tony Wallace in the box from a corner, before being volleyed home emphatically. Paddy Martin was then called into action shortly after in a 1v1 to ensure that the margin was kept to 1. The Warriors got their equaliser on the 82nd minute when David Hopkirk got on the end of a low cross into the box, dispatching into the bottom left hand corner after taking a touch to control the ball.

Match Highlights, courtesy of Annan Athletic can be accessed by clicking Here

Back at the weekend, the Warriors failed to replicate their recent victory over Cowdenbeath as we slipped to a 2-0 defeat against the Fife side in Graeme Smith’s first match as stand in manager. The visitors had the best of the early exchanges before Mark McGuigan failed to capitalise on a huge chance to open the scoring after being played through on goal by a slack pass in the Cowdenbeath defence. Hopkirk was next to come close on the 72nd minute as his half volley edged just over the opposition crossbar. The breakthrough came for the Blue Brazil in the 77th minute as kris Renton tapped home from 1 yard to finish off a quick breakaway coming during a spell of Warriors pressure. The away team secured all 3 points just 7 minutes later when Jamie Todd turned home a well delivered corner kick. 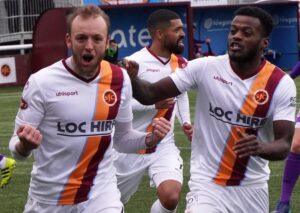 Heading into our final 2 league matches of the season, Graeme Smith remains out long term with an ACL injury. Paul Brown (hamstring) and Callum Yeats (quads) are both out for the remainder of the season. Both Ryan Watters (ankle) and Jack Brydon (groin) will miss tonight’s game against Albion Rovers. Meanwhile Alan Docherty remains out with a foot injury. Cammy Graham has made a return to training but remains unavailable. Creag Little is suspended.

In our final home league match of the season, the Warriors will take on Albion Rovers at Ochilview. The boys will be looking to replicate the performance that saw them defeat the Coatbridge outfit 2-0 in the first game after the restart. However, the visitors have been in strong form of late, losing just once in their previous 6 matches. Going into the game, the Warriors sit just 2 points above Rovers, meaning the result will have a massive bearing on who finishes in 6th spot in the table.

Join us on Warriors tv ( https://stenhousemuirfc.univtec.com/outside/login), with the match being streamed for free for season ticket holders. Alternatively, Pay-per-view can be purchased for just £8.

Our final league match of the season sees the boys make the trip up to Angus to face off against Brechin City. The Glebe Park side have been rooted to the foot of the table all season but have seen slight improvements in form of late and picked up their first league win since October as they saw off Cowdenbeath 2-0 on Tuesday. The Warriors will be keen to finish the season on a positive note and improve on the 1-1 draw that occurred the last time the sides met.

Tuesday’s game is being streamed by our hosts and is available to watch for £10 at https://brechincity.univtec.com/home

The latest from within YOUR club

The club’s ladies side may not have played competitively in over a year, however plenty work remains ongoing behind the scenes to ensure that the side is in the best place possible come the resumption of matches.

The club is delighted to announce the addition Derek Johnston as head coach, as well as Ryan Smith as first team coach and performance analysist. To learn more about Derek and Ryan and to hear what they had to say about joining the club, please follow the link below:

Community Consultation – A massive thank you

Everyone at the club would like to give a massive thanks to every supporter that participated in our community consultation as part of our work with The Falkirk Community Planning Partnership!

As a club, we are proud to place the community at the centre of our thinking and we thoroughly believe in our role as a community anchor organisation. However none of this is possible without the incredible engagement from the most crucial element of our club – the fanbase.

Our questionnaires received over 150 responses and more than 50 supporters attended our 2 online consultations last night and last Wednesday. All the thoughts and opinions offered will go a long way to improving the community in which we all share.

In case you missed our announcement regarding the Falkirk Community Planning Partnership, you can catch up on all the relevant details by following the link:

The Warriors may be safe from participating in any sort of relegation playoff this term, however Scottish football will be watching closely to see whether or not the SPFL decide to push ahead with the pyramid playoffs. To date the governing body has refused to commit to allowing the playoffs amid calls from Brechin City and Cowdenbeath to have them cancelled for a second season running. A final outcome is expected today and more details can be found by following the link below:

Sadly there won’t be the opportunity for Warriors fans to see the boys play live this season, however from the 17th of May onwards, up to 500 supporters will be permitted at matches. This means that it is possible for fans to be in attendance at the Scottish Cup final, as well as the respective playoff finals in each division, which will be a welcome sight for many across the country. Follow the link below to read more:

You may have noticed the recent increase in coverage of Scottish football by Premier Sports. On Tuesday it was announced they would be stepping up this involvement further by striking a new deal with the SPFL over the League Cup. The new deal will see the tournament named the Premier Sports Cup for the coming 2 seasons and will see the broadcaster gain exclusive rights to the competition until the 2026/27 season. Follow the link below to read more:

The Warriors win promotion back to League 1 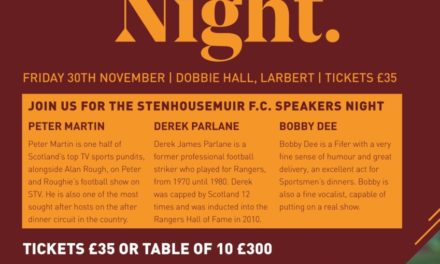