Welcome to the first ever edition of Inside Ochilview!

At Stenhousemuir we recognise the importance of supporters to not just our club, but to football as a whole. Therefore, we feel a duty to ensure that the club is ran as transparently as possible, with supporters feeling both fully informed and fully appreciated. We hope that Inside Ochilview adds value to your supporter experience and please remember to let us know about anything you would like to see feature in future editions. 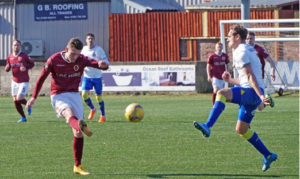 The teams shared the points Tuesday night as the Warriors travelled up to Brechin. Despite falling behind on 12 minutes on account of a great Brechin team move, the boys rallied and were soon level though a stunning long range strike from Jack Hodge. The warriors failed to convert a penalty shortly before half time and came close again on numerous occasions in the second half but couldn’t find the winner. A frustrating night in the end but with plenty of positives to take from the performance.

Back on Saturday, the Warriors came up against arguably their sternest test of the season in Premiership club Kilmarnock. Despite a spirited and hardworking performance, the boys ultimately came out second best to the full time side with international level player Kyle lafferty grabbing a hat-trick. Paddy Martin was excellent between the sticks, receiving both supporter’s man of the match and praise from manager Davie Irons. We are pleased to note that Saturday’s game was watched by a virtual crowd of over 1,100, providing crucial revenue for the club. Thanks as always for your incredible support! 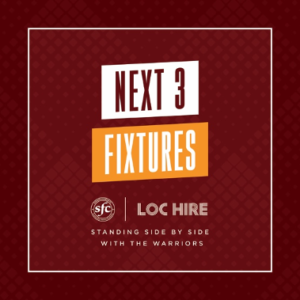 Graeme Smith is out long term with a damaged ACL. Paul brown has a slight hamstring issue and misses the Cowdenbeath match, however we are hopeful that he will return to action for Saturday. Cammy Graham is unavailable.

The Warriors will be keen to get back to winning ways in our first league match at home since the 2-0 victory over Albion Rovers. Our opponents tonight come to Ochilview having not won in the previous 4 league matches and failing to score in their last 2. A win for the Warriors would keep the pressure on Stranraer as we push for a top half finish before the league splits.

The games are coming thick and fast for the Warriors as we welcome run-away league leaders Queens Park to Ochilview. The Spiders have won each of their games since the restart and given the ruthlessness of our opponents this season, points gained here would go a long way in terms of the league table.

The Warriors will wrap up a punishing schedule of 3 matches in 6 days as we face 2ndplace Elgin City at Ochilview. City appear to have recovered from their shaky form after the restart with 3 wins from 3. Join us on Tuesday night for what is set to be another enthralling encounter.

The latest from inside your club

The club is delighted to announce that going forward we will be working together with the Falkirk Community Planning Partnership in order to help better the community in which we share. As a Community Anchor Organisation we want the club to play a leading role in the recovery, rebuild and growth of our town. But to do that properly we need to hear your views, ideas and suggestions.

If you have a spare 5 minutes please do take the time to fill out our short questionnaire:

Supporters should be aware that our league fixture away to Stranraer, which was due to be played on Saturday the 17thof April, has now been moved to 7pm on Thursday the 15thof April due to our hosts continued involvement in the Scottish Cup.

We are excited to announce that we have begun our search for a new Community Engagement and Inclusion Officer. The deadline for applications is Friday the 16thof April and all the relevant information can be found by following the link bellow:

Please follow the link below to read more on the latest changes being made to the live streaming coverage of Warriors matches, with some very exciting developments still to come. It’s not quite the same as being at Ochilview in person, however we are working hard to ensure the very best spectating experience possible, as well as value for money for supporters.

Earlier this week was the deadline for Euro 2020 host associations to submit plans for allowing supporters into their matches at this summers European Championships. Yesterday the news broke that the SFA had reached an agreement with the Scottish Government to permit up to 12,000 at each game, including Scotland’s clashes with the Czech Republic and Croatia. Read more:

Why were teams protesting Qatar during the international break?

Over the course of the international break you may have noticed various protests from the likes of Norway and Germany relating to Qatar’s hosting of the 2022 World Cup. Follow the link below to find out why Qatar’s prospective hosting is so controversial and what the authorities are currently saying about the issue:

SFA writes to Scottish political parties ahead of May’s elections

This week, the SFA wrote to each of Scotland’s political parties to outline what they would like to see from the new Scottish Government. The key areas of focus were reducing cost barriers to youth participation, using football as a tool for health and wellbeing and turning Hampden Park into a hub for excellence. Follow the link to read more: