Kane is a Warrior!!!

Stenhousemuir Football Club is delighted to announce Chris Kane as our latest addition.

The defensive midfielder becomes Manager Davie Irons 12th signing ahead of the new season as he continues to build a squad aiming to challenge at the top of the league.

Kane, 27, a product of the Hearts academy made his professional debut for Dunfermline Athletic in 2012. After a couple of seasons at East End Park he joined Cowdenbeath and then moved to East Fife where he made 81 appearances. Most recently Kane was at fellow League 2 side Edinburgh City before opting to join the Warriors. Kane, who can also play at centre back and right back has made 186 professional appearances in his career to date. Chris will join up with the squad when pre-season begins in late August ahead of the campaign kicking off in October.

‘Chris is a combative defensive minded midfielder with the versatility of being able to cover across the back 4 if required. He he significant experience both in League 2 and in League 1 which is where we are aiming to be this time next year’.

‘The attributes Chris will bring to the club and the type of player he is will really enhance the strong group we already have here at Stenhousemuir FC. To allow players such as David Hopkirk and Ryan Blair the freedom to get on the ball and affect the game higher up we need to build a strong foundation around them. Myself and Kevin feel that Chris will be integral to how we plan to shape the team moving forward, he will help our more attack minded players play higher and cause teams trouble’.

‘Chris is also the type of character we want in the dressing room. An individual who wants to learn and progress and support the club to achieve its ambitions. He possesses that winning mindset and desire to improve that will not only benefit the club but it will help his teammates. We look forward to working with him’.

Chris Kane spoke of his ambitions after joining the club.

‘I am looking forward to getting started and to meeting the rest of the squad. I have enjoyed speaking to the Manager and Assistant over the last couple of weeks and getting a feel for where they are hoping to take the club. I want to play my part in helping this club club get back up the leagues’.

Welcome to the Warriors Chris.

Full details of Player Sponsorship will be announced over the coming weeks. To reserve sponsorship on Chris Kane’s home or away top email jamie.swinney@stenhousemuirfc.com 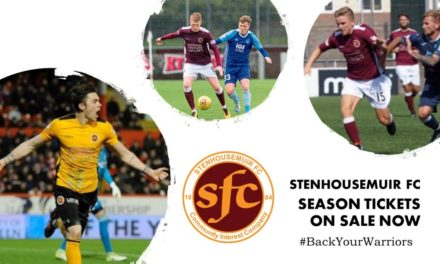