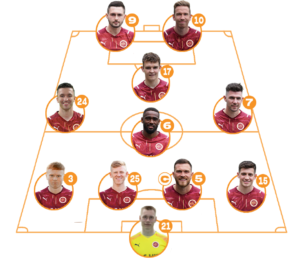 The game started quiet and Stenhousemuir had their first chance with a 3rd minute corner. A deep cross was met towards the back of the box by Mikey Miller, but his header was easily held by Schwake in the home goal. The Warriors regained possession and picked up a free kick on the right of the pitch. Another Ross Forbes cross was met by Robert Thomson this time with his header drifting just wide.

Warriors found themselves in some trouble in the 12th minute as some neat work by Edinburgh found them having a clean shot inside the box. Luckily, the ball going well high and wide.