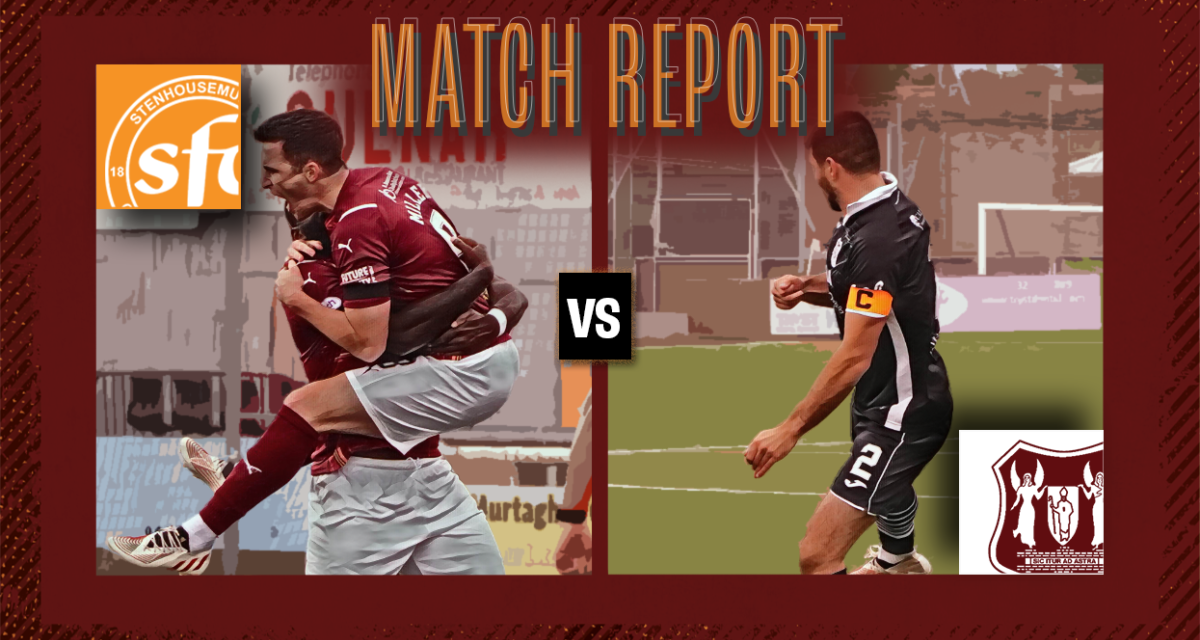 Stephen Swift was looking to it make it 3 wins on the bounce as we welcomed Elgin City to Ochilview.

And Swifty kept the same starting XI for the 3rd match in a row as he looks to maintain that winning streak.

The Warriors made a quick start and almost had an immediate reward. Higgins played a sublime passed down the left to Sewell who managed to knock the ball passed the defender and get his cross in. The ball was intercepted by the defender but Many Yates managed to collect the ball inside the box and his shot came back off the crossbar.

The hosts continued to press for the opener and Nat Wedderburn had a rare chance to score in the 10th minute, but the big midfielder just missed Brown’s corner.

GOAL: Against the run of play, the visitors take the lead. A long throw ball should’ve been dealt with by Jamieson but the defender missed his header allowing Hester to have an easy shot on goal, firing passed Brennan. STENHOUSEMUIR 0-1 ELGIN CITY [Hester 16 minutes]

After the goal, Elgin were more than happy to sit back and play long balls over the top with the home defence struggling against Hester, it seems an ideal game plan.

Adam Brown had the next chance for the home side, but his 25 yard drive was never troubling Hobbin in the Elgin goal.

Into the last 5 minutes of the half and a dangerous free kick swung in by Yates was missed by a host of players, with Forbes looking most likely to get his head on the end of the free kick.

GOAL: on the stroke of half time, The Warriors equalise with a fine worked goal. Sean Crighton laid the ball out wide right to Mikey Miller, he played a neat 1-2 with Adam Brown and the right back found the far corner with a neat finish. Miller’s 1st goal at Ochilview and his 3rd for The Warriors, amazingly, all 3 coming against Elgin City. STENHOUSEMUIR 1-1 ELGIN CITY [Mikey Miller 45 minutes]

Into the second half and Elgin continued their route one approach which is causing Jamieson all sorts of issues as he struggles with Hester. This time, the striker cut the ball back to Dingwall who forced a good save from Brennan.

GOAL: A sublime strike from Adam Brown puts The Warriors into the driving seat. Matty Yates picked the ball up and found Adam Brown in space. The midfielder took a touch to settle himself and drilled the ball home from 20 yards. It’s only the fifth time under Stephen Swift that the Warriors have turned a game from a losing to winning position. 2 wins and 2 draws as a result from the previous 4 instances. STENHOUSEMUIR 2-1 ELGIN CITY [Adam Brown 51 minutes]

GOAL: An immediate response form the visitors. Callum Yeats seemed to have been fouled a few times and he struggled with Findlay, the cross came in though and Dingwall got on the end of a knock down and gave Brennan no chance. STENHOUSEMUIR 2-2 ELGIN CITY [Dingwall 54 minutes]

And a few moments later, the visitors almost had the lead for not a Dan Higgins block, which kept the score 2 each.

GOAL: Nicky Jamieson will be seeing Kane Hester in his nightmares as the defender has struggled with the striker all day. This time Hester got on the end of another long ball, Jamieson struggled to keep up and the Elgin City lobbed Brennan to regain the lead. STENHOUSEMUIR 2-3 ELGIN CITY [Hester 70 minutes]

That goal forced a change of shape from Stephen Swift as Jamieson was replaced by Tam Orr with The Warriors reverting to a back 4 for the remainder of the game.

Tam Orr almost pulled the score level on 77 minutes as he was through on goal following a good run from Higgins. Hobbin was able to rush out though and save his teams lead.

Into the final 10 and The Warriors are pushing for a deserved equaliser. Corners are proving dangerous though with the home side dominating in the air.

GOAL: And a corner it is! Adam Brown delivered and Sean Crighton rose above everyone else and headed home. The visitors claiming the ball didn’t cross the line, but the assistant referee flagging for the goal. STENHOUSEMUIR 3-3 ELGIN CITY [Crighton 83 minutes]

An afternoon where The Warriors showed their strengths and their weaknesses. Some poor defending at times caused so much unnecessary trouble, but the quality of the goals scored and the determination of the team to get something from the game should bold well for future matches.

Next up we travel to East Fife for our re-arranged League Two fixture. 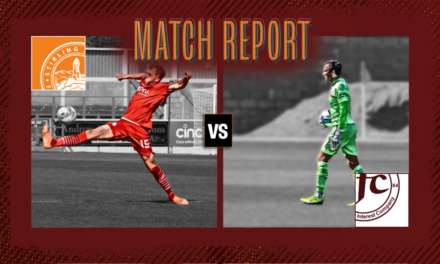 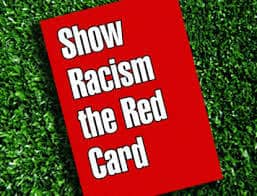 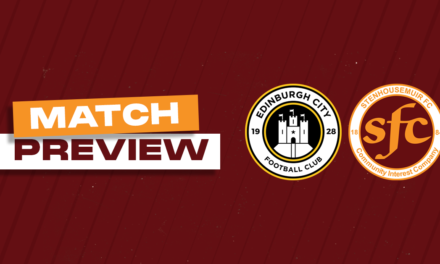