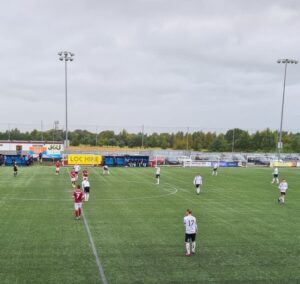 For the third consecutive week, Stenhousemuir conceded early. Forfar took the lead via a deflected shot from Craig Thomson that looped over Wilson’s head in the 4th minute to make it 0-1.

It was never going to be an easy task as Forfar came to Ochilview having shown some good early season form and Thomson’s early goal made it even more difficult.

Stenhousemuir’s first chance came in 11 minutes when Euan O’Reilly drove up the left wing and say his shot go inches past the opposite post.

There were calls for a red card for Forfar’s Scott Shepherd a few minutes later after a wild lunge, but the referee deemed a yellow card was enough punishment. Dec Hughes subsequent free kick was easily dealt with by the Forfar defence.

With both teams trying to push on, it was Stenhousemuir who had the next chance as Euan O’Reilly was played through. However, the referee flagged Thomas Orr for offside after considering the striker to have been active with play.

Stenhousemuir continued their push for an equaliser as Thomas Orr fired  Michael Miller’s cross past the near post.

Both teams then tried to break the other down with no real efforts of note util the 30th minute when Matthew Aitken went down in the Warriors box. The referee waived away the appeals and he managed to fire the subsequent corner over the bar.

The Warriors continued to push on throughout the first half, but failed to create any chances of note. A trait that’s unfortunately been common this season.

The second half very quickly settled into the same pattern as the first with both teams struggling to create any opportunities. Stenhousemuir did have a great opportunity in the first 5 minutes as a great run by the growingly impressive O’Reilly saw his cross met by Ross Forbes with the midfielder drilling his shot past the post.

A driving run by James Lyon in the 51st minute saw the Partick Thistle loanee pulled to the ground with the resultant free kick in proper Ross Forbes range. After hit the crossbar a few times this season, Forbes decided to go low and his shot was saved by Mark McCallum in the Forfar goal.

Stephen Swift made a double change after 60 minutes with Robert Thomson and Adam Brown taken to the pitch in place of Thomas Orr and Declan Hughes.

All good Stenhousemuir attacks are coming through Euan O’Reilly, another driving run saw the former Airdrie player brought down, the ref played advantage and the shot from Brown went wide.

The game then returned to form with both teams struggling to break the other down.

Stenhousemuir had a great chance to equalise as some good work by Thomson on the right resulted in a cross to Adam Brown who then say his weak shot easily saved by McCallum. Forfar immediately went up the park and a slack clearance by Ross Lyon resulted in a solid save by David Wilson.

The next 10 minutes saw plenty of possession for Stenhousemuir but again, failed to find that final ball that caused Forfar any trouble.

Stenhousemuir then made their 3rd change of the match, and a attacking one as James Lyon came off for Ryan Tierney.

Robert Thomson was next up to have a shot. His header from an O’Reilly cross was easily met by the keeper. The O’Reilly – Thomson connection certainly looks most likely to create chances for the home team.

Forfar took a rare foley forward 83 minutes with Stefan McCluskey’s shot wildly over. Forfar will be very happy with how the game’s panned out. Despite sitting back and inviting the Warriors on, there’s been little opportunities for the Warriors fans to cheer about.

Stephen Swift made his final change with the returning Daz Christie taken to the pitch to replace Ross Forbes. His first piece of action was to watch Euan O’Reilly drive forward and have his shot blocked again by McCallum.

Some late pressure from Warriors finally paid off as SEAN CRIGHTON powered home his first goal for the club. A far post corner by Adam Brown was perfectly met at the back post and the big man’s header was never going to be stopped 1-1 into the last few minutes.

Stenhousemuir drove for a winner and Euan O’Reilly almost capped off a fine performance with a goal but the ball was scrambled clear. Sean Crighton almost doubled his tally as he saw another header cleared off the line. A valuable post for the Warriors, but again, it needs to be more. 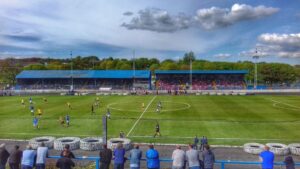 Unfortunately Warriors fans there is no match this weekend as our first gameless weekend has finally arrived with us having played each team in the division once.

With plenty room for improvement, the boys will be training hard over the short break to ensure that they are as prepared as possible for when we return to action.

It’s absolutely crucial that we lift our form once we resume and there’s no better game to do it in than against Cowdenbeath who sit level on points with us in the table. We travel to Central park on the 16th of October for what will no doubt be a classic 6 pointer. We hope to see you all there to cheer on the Warriors!

In the meantime, its international duty for us supporters, with massive games taking place all over Europe as we begin to reach the final stages of the World Cup qualifiers.

For Scotland we have the mouth-watering prospect  of a sold out Hampden Park against Israel, followed by another massive game away to the Faroe Islands. As for our Norwegian supporters, two wins against Turkey and Montenegro can help cement them as one of the top two sides in their group in their pursuit of qualification.

But whoever you are supporting this international break, enjoy it and we’ll see you on the 16th!

Back on Sunday, the Warriors returned to action after a short break to play host to league leaders Gartcairn in their latest SWF Championship South fixture.

Unfortunately the ladies fell to a 1-4 defeat, however the performance, especially in the first half, was one that will give real encouragement for the remainder of the season and provide them with a platform to build off of.

The Warriors went behind early on, however rallied excellently and got themselves back into the game through a superb strike from Sammy Montgomery to leave the scoreline at 1-1 going into the break.

Gartcairn restored their lead in the 55th minute, which meant the Warriors then had to push forward, leaving space free at the back. The visitors were able to take advantage of this and grabbed two late goals in the 77th and 85th minutes to cement their victory.

This week, the club announced the winners from September’s Community Sports Lottery. Congratulations to all of our latest winners, who are listed below:

As always, anyone is free to sign up to our lottery with all instructions detailing how to sign up accessible by clicking on the link below: 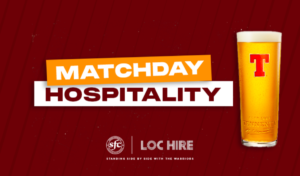 Our next home match is set to be our Scottish Cup tie with Highland League Huntly on Saturday the 23rd of October. We are pleased to confirm that hospitality is now on sale for this fixture. 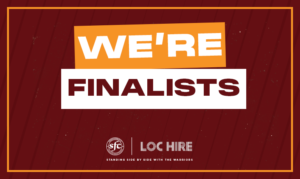 Don’t worry if you missed the announcement last week, Inside Ochilview has all the details right here as the Warriors make it through to the final!

Sadly not the Scottish Cup final, but the club has been announced as finalists in the Herald Digital Transformation Awards for the leading role that the club played in the introduction of match day live streaming across a number of SPFL clubs during the pandemic.  The Warriors, together with Albion Rovers FC have been jointly nominated in the Digitally Transformed Business category.

Please follow the link below to learn more and also see what club Chairman Iain McMenemy had to say about the nomination: 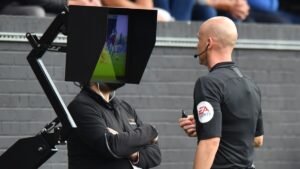 After the Scottish Senior Referee’s Association gave their backing to the introduction of VAR to the Scottish domestic game, the SFA and SPFL have agreed to meet tomorrow to discuss the potential move. Please follow the link below to read more:

Last week saw a momentous night for our national women’s game as it continues to make great strides in its development. A domestic Scottish record of 5,512 spectators were inside Easter Road for the Edinburgh derby. Please follow the link below to read more:

Henry McLeish, author of the biggest ever review of the Scottish game, is concerned about the SPFL review commissioned by Hearts, Hibs, Aberdeen, Dundee and Dundee United. He believes that the review will only recommend what’s in the interests of the 5 aforementioned clubs. Please follow the link below to read more: