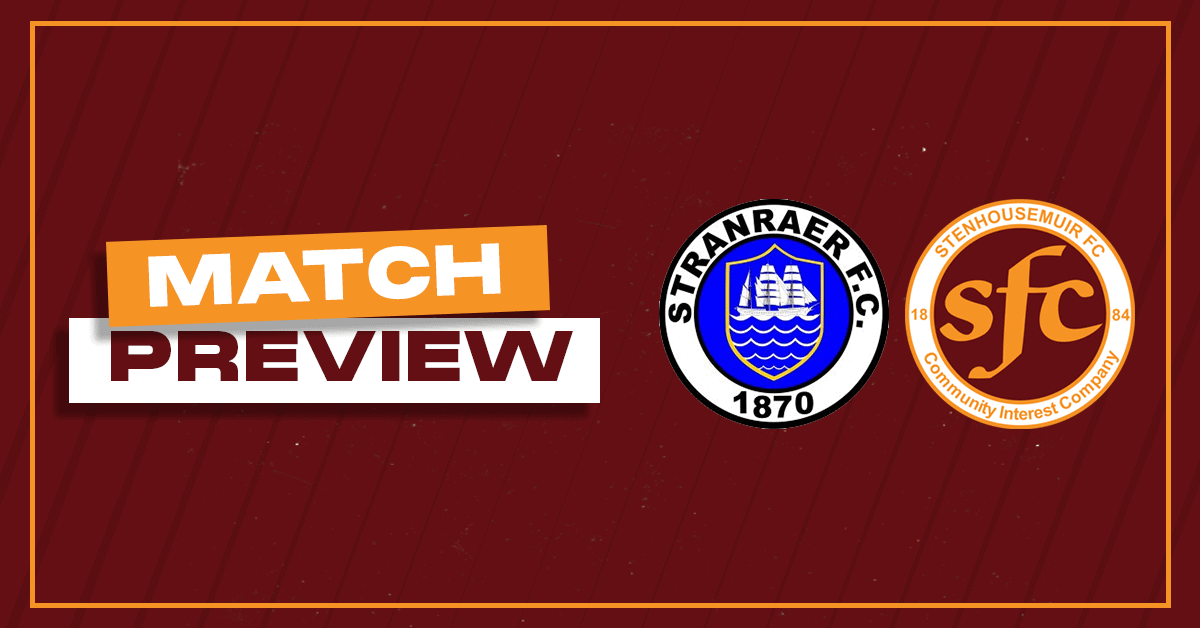 The Warriors return to action on Saturday as they visit Stranraer.

The hosts will be full on confidence for this one given their recent history against Stenhousemuir, especially having won the previous two meetings this season.

A win for the home side will see them leapfrog The Warriors into 5th place. However, an away win will host The Warriors’ promotion push and could put them 1 point behind 4th place Edinburgh City, with a game in hand over The Citizens. A victory could also close the gaps on Annan in 3rd and Forfar in 4th.

With a busy spell coming up, including 2 matches against Edinburgh, it’s important for the boys to continue their recent good form as we move into the business end of the season.

Stephen Swift should have close to a full squad to choose from aside from Graeme Smith.

Stenhousemuir vs Stranraer [5th vs 6th]

For those that can’t attend, the match will be shown on Stranraer’s PPV and you should check out their social media channels for full details.

As always, Warriors TV caught up with the manager before this weekend’s match.

Yet another free week for the lads last weekend, what did they get up to during their free time?

It’s been a bit frustrating in regards to having a few of these weekends lately. The Scottish cup ties every time have fell with a team that we’re ready to play which has been a bit frustrating. The players enjoyed, probably, their last weekend off because we worked hard through the week. But we’ve told them, there’s 7 games in 30 days coming up, so it’s going to be a really intense time, and it was important for them to get the rest to prepare for what’s coming ahead.

Thommo returned to playing a few weeks ago, but has yet to get a full 90 minutes under his belt. Have we been able to get him back to 100% during this break?

I think Thommo needed that free week. We played a friendly against Ayr United and he’s opened his ankle up a wee bit but he’s managed to train this week. Although he’s been playing, there has to be a process for Thommo to get back up to the level that was at.

We all know our games against Stranraer this season have been well below par. How have you prepared this time around to ensure that we get a better performance and a better result?

We’ve told the boys that they have really done one over on us this season. And, with that, it’s coincided with our worst performances. So, although they’ve been better than us for reasons, and we’re aware of those reasons and we’ll try and rectify them, but having said that, I’m hoping that we can’t be as bad as before. I do think that we’re in a better place at the moment and we have the full squad back. So we’re hoping that we can do the things that we’ve been doing well in the last few games and hopefully that will be enough to get a good result against Stranraer, but we’re well aware that it’s a tough place to go.

Tam Orr won the Player of the Month for January. How important have his goals been lately?

Tam won his award on merit. He done very well because since the turn of the year, his goals have been very important to us. At times he’s been playing up there himself, but with Thommo coming back, he prefers having that partnership and I think he’ll go from strength to strength and get even more goals. So yes, he’s been important, but we’re looking for Tam to get a good run in between ow and the end of the season so that he can be as important as he has been and continue that form.

SFC Autographed Footballs now on Sale in the Club Shop