Last week, we all learned that Ryan Thomson, a player from our 2007s team, was diagnosed with Hodgkin Lymphoma and has started his treatment and journey to beat the disease.

This is heartbreaking for any family, but for a young boy we know as one of our own, we want to ensure we are with Ryan & his family every step of the way.

Ryan’s Journey started last week as he went through the first part of his chemotherapy treatment.

Please join us in wishing Ryan & his family all the very best. Once a Warrior, always a Warrior. The Warriors return to action on Saturday as they visit Stranraer.

The hosts will be full on confidence for this one given their recent history against Stenhousemuir, especially having won the previous two meetings this season.

A win for the home side will see them leapfrog The Warriors into 5th place. However, an away win will host The Warriors’ promotion push and could put them 1 point behind 4th place Edinburgh City, with a game in hand over The Citizens. A victory could also close the gaps on Annan in 3rd and Forfar in 4th.

With a busy spell coming up, including 2 matches against Edinburgh, it’s important for the boys to continue their recent good form as we move into the business end of the season.

Stephen Swift should have close to a full squad to choose from. The only injury doubt is Player of the Month, Thomas Orr. The on form striker limped off against Annan Athletic and will face a race against time to prove his fitness for Saturday.

2 Mar vs Edinburgh City [away]

5 Mar vs Stirling Albion [away]

Keep an eye on our socials for tickets, PPV and match details.

If you’d like to keep up to date on our player’s stats, you can visit our stats page HERE.

Our Ladies team play their final game before the league split on Sunday 20th February with a 2.30pm kick off.

You can come along and cheer them on with free match entry. Or, you can watch for free on Warriors TV.

Be sure to keep up to date with all the Ladies news on their Twitter account @StennyLadies including their post-split league fixture schedule.

Last weekend’s Scottish Cup ties failed to deliver any shocks. In fact, 7 out of the 8 remaining teams in the competition currently sit 1st – 7th in the Premiership with 11th placed Dundee making up the 8th place.

Ties to be played on the weekend of 12 March.

Ole Gunnar Solskjaer has been tipped for a sensational return to football management just months after leaving Manchester United.

Former Aberdeen player Charlie Nicholas is one of the high-profile names that want Solskjaer to take over in the North East.

The Dons recently parted with manager Stephen Glass after their Scottish Cup exit to Motherwell on Saturday, ending an 11 month spell in charge of the club.

Jim Goodwin is the bookies favourite, and a more likely candidate. Jack Ross, Derek Adams, Gordon Strachan and Neil Lennon are all in the running. 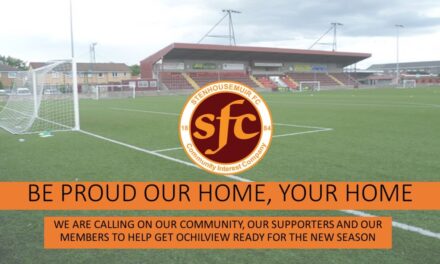 Help us modernise Ochilview Park- Our home, your home