A while back supporters might recall that we asked you to vote in a poll to help the club secure some funding which would allow us to set up a new mental health initiative.

Well this week the club has confirmed that we were successful in receiving this funding! Consequently, we will now be starting a new partnership with Andy’s Man Club (https://andysmanclub.co.uk) to create a men’s only support group.

We would like to say thank you to everyone that took the time to vote for our cause. We believe that by working closely with Andy’s Man Club, we can make a difference to men in the Falkirk area.

To run the club, we’re on the lookout for some volunteers to help facilitate the sessions. Full training will be given to anyone that’s interested, but to keep in tone with the group, it has to be a man. If you’re keen to volunteer as a facilitator, please contact Fiona Kennedy at  Fiona.kennedy@stenhousemuirfc.com

After 3 successive away matches, the Warriors made their return to Ochilview back on Saturday as we played host to Elgin City in Cinch League 2.

It was great to see the Warriors fans back supporting the boys, however we got off to the worst possible start when we fell behind in only the 4th minute. MacPhee swung in a corner for Elgin Towards the front post where McHardy was able to beat all the Warriors defenders to the ball to head home past David Wilson.

This inevitably had the Warriors shaken and Elgin almost doubled their lead only a few minutes later, this time MacPhee’s headed effort only just flashed past the post after he got on the end of a flick on from a long throw.

Despite a poor start, the Warriors did begin to come into the game and make a contest of it. We were able to create our first half chance after 10 minutes when James Lyon drove into the box and slipped the ball to Orr who turned and got a snap shot away, however his effort was straight at McHale in the visitors goal.

As the first half progressed, the Warriors grew further into the game and began to see the better of the play. Half chances fell to Wedderburn and O’Reilly but nothing too clear cut was created. Elgin were able to see the half out to take a 1-0 lead into the break.

The second half began as it finished with the Warriors on top. A fine passing move in the 47th minute saw the ball eventually cut back to Forbes 12 yards out but his first time effort only narrowly evaded the far post with the keeper beaten.

The boys came close again in the 67th minute, this time with McHale being called into action. Adam brown played the ball down into the left channel where it was picked up by Orr. Orr then shrugged off the first defender before coming inside the second and firing a low shot to the near post which was turned round well by McHale.

The resulting corner was cleared but only as far as Brown who sent an excellent diagonal ball long into the box where it was met by the head of Jamieson. The Alloa loanee was able to send a great header into the net low and hard at the front post to pull the Warriors level.

The boys were now firmly in the ascendancy and so nearly completed the turnaround in the 73rd minute as O’Reilly nicked the ball off of an Elgin defender and surged into the box. He then played a ball across to Brown who looked set to score from only 6 yards out but his side-footed volley flew over the bar.

Agonisingly however for the Warriors, it would be the away team that would grab the next goal. Elgin built the ball up well on their left hand side before working the ball across to Russell Dingwall who cut inside and slotted home to make it 1-2 with 14 minutes remaining.

Elgin were then able to see out their lead until the full time whistle and took home all 3 points back up the road to the highlands. This was a hard one to take for the boys given the spells they had on top and the chances created. The result sees Elgin move up to 6th in the table, whereas the Warriors sit 9th, level on points with bottom side Cowdenbeath.

This Saturday The Warriors are at home again for another Cinch League 2 encounter. This time our visitors are Forfar Athletic who joined the division after relegation from League 1 last season.

Heading into the match the Warriors sit 9thin the table, level on points with 10th place Cowdenbeath. Although this could all change with Cowdenbeath playing on the Friday night against Edinburgh City. The boys will have their sights set on getting the 3 points which would make possible leapfrogging either Stranraer or Albion Rovers who play each other this weekend. Forfar sit 4th in the table with an aim to keeping themselves in the playoff spots.

The Warriors have lost 2 on the bounce after the victory over Annan Athletic, however Saturdays loss to Elgin was a significant improvement performance wise from the defeat away to Stranraer. Forfar did win against Albion Rovers, however this was their first win in 6 prior matches.

Pay at the gate is in operation for this fixture with adult admission costing £14, concessions £9 and under 16’s just £5.

In addition, the wee bar will be open prior to kick off.

After a two week absence, we are delighted to confirm that the ladies team will return to action this Sunday as they resume their SWF Championship South campaign!

Its set to be a tough game back as the Warriors welcome Gartcairn who moved top of the table after thrashing Edinburgh Caledonia last weekend.

Kick off is 2:30 pm at Ochilview and as always entry is free for all supporters! If your unable to get yourself along then don’t worry the game will stream for free on Warriors TV and live updates will be posted via the ladies team Twitter. 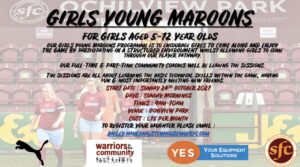 Warriors in the Community are delighted to announce the launch of their Girls Young Maroons Programme!

This new programme will serve as an excellent opportunity for young girls who may not want to play in a competitive environment with our Community Select Teams and just want to come along and play football for fun and meet new friends!

We want to create a full pathway for both Boys & Girls and we feel this is an excellent step forward for Girls moving from the Mini Maroons Programme to the Girls Young Maroons Programme as well as offering out to our wider community. 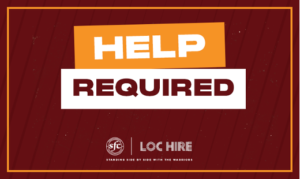 Clubs the size of us are not only reliant on volunteers but we are proud of that very fact! It’s a way for the club to properly connect with the supporters and vice versa.

With this in mind, we’re looking for some matchday help in operating our turnstiles and selling 50-50 tickets, with all volunteers being welcome to stay and watch the match. If you can spare us some time, please contact the club via email at info@stenhousemuirfc.com

We look forward to hearing from you! 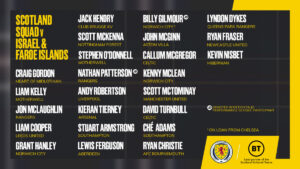 Back on Tuesday, Steve Clarke announced his Scotland squad to face Israel and the Faroe Islands in what are two massive matches for the nation. All the details can be found by following the link below:

He’s best known for his sizable donations to the Scottish game during the beginning of the Covid-19 pandemic. Now James Anderson has been making a further contribution, this time by donating £1.5M to the grassroots game. Please follow the link below to read more:

This week UEFA has confirmed that it will be dropping all legal action against the clubs that moved to form the European Super League earlier this year. Please follow the link below to read more: 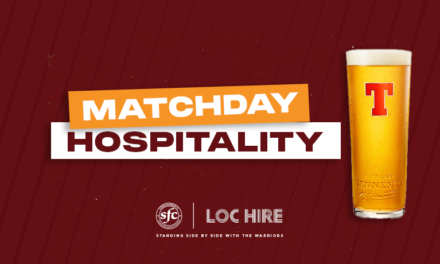 We Are Staying Up