Our first competitive goal of the season makes it onto the list. Partick Thistle loanee James Lyon got us up and running with his only goal for The Warriors. The youngster picked up a pass from Tam Orr. He then settled himself and picked out the top corner from 20 yards out.

Cammy is one of only 3 players that’s been at the club longer than the manager. His goal in the SPFL Trust Trophy was almost identical to James Lyons. And it was James that set him up this time following a through ball from Nat Wedderburn. Similar to James, Cammy to a second to tee up the ball perfectly then hit the top corner.

Our third goal came in the Scottish Cup and the only goal on the list that didn’t have an assist! Tam Orr’s shot was blocked by the defence and the ball made it’s way out to Right Back, Ross Lyon. He controlled the ball with a single touch, then fired the ball into the top corner from 20 yards.

Our final goal is the only goal on the list that didn’t come from a single moment of magic, it was a true team goal and truly epitomised Stephen Swift’s style of play. Ross Lyon, Ross Forbes and Daz Christie were all involved in the build up, but it was Ross Forbes’ back heel into the 6 yarder that was the killer pass of the move which lead to Adam Corbett taking a touch to fake the goalkeeper, then fire into the back of the net.

The Warriors made the long trip north last weekend to take on struggling Elgin City. A win for the home side will ensure their safety from the relegation playoffs, while a victory for the home side keeps the pressure on 4th placed Edinburgh City.

Mikey Anderson missed out after picking up an injury against Annan Athletic. Adam Brown replaced the midfielder, with Euan O’Reilly also starting in place of James Lyon. David Wilson also continued in goals with the absence of Peter Urminsky.

Elgin City were the first to find the back of the net, but the assistant referee raised his flag rendering the ‘goal’ offside.

Euan O’Reilly was deployed in his favoured left wing position and the Elgin defence really struggled to cope with the winger. Adam Brown getting on the end of his first proper cross, but the header was straight towards the home keeper.

Adam Corbett was next to have a go He picked up a long pass by Nicky Jamieson and the space opened up has he drove towards the defence. His strike was well saved though, and went out for an away corner.

GOAL: Adam Brown swung in the corner and it was Adam Corbett meeting it to head home the opening goal and give the defender his 4th goal of the season. ELGIN CITY 0-1 STENHOUSEMUIR [Adam Corbett, 14 minutes]

Adam Brown almost joined his namesake on the scoresheet shortly after. Sean Crighton flicked on an Adam Corbett long throw and the midfielder was first to meet the ball, but headed just over the bar.

And again, it was Adam to Adam just a few moments later. This time Adam Brown floated in a free kick which was met by Adam Corbett. His header looped over the goalkeeper and ended up in the back of the net. For some reason, the referee judged to have seen a foul and, after a short discussion with his assistant, chalked the goal off, but we’re not 100% sure why.

Into the second half and it was Elgin that had the first chance. Nicky Jamieson continued to be the man mountain that we’ve come to love and he got in the way of everything that came into the box.

Adam Corbett was continuing to cause the home side problems. A quick burst up the wing, and after a neat 1-2 with Adam Brown, the defender had a great shooting chance, but failed to find the target.

Elgin were still searching for an equaliser though, but were failing to cause any trouble for the visiting defence. Even when the defence was breached, Div Wilson was on hand to collect any loose balls. The young keeper also made an important double save with Elgin looking certain to find the back of the net.

GOAL: Deep into the 2nd half and Mikey Miller fired a cross into the box that missed everyone, keeper included, and fell into the back of the net! Cross of the Season for sure, but it’s enough to double The Warriors lead. ELGIN CITY 0-2 STENHOUSEMUIR [Michael Miller 83 minutes]

That goal killed off the game with the final 7 minutes being a formality.

We’re onto the last 3 games of the season and welcome the Coatbridge side to Ochilview in our penultimate home match.

Time is running out on our Playoff push with Edinburgh City still 3 points ahead and will be relying on Cowdenbeath to take 3 points from the capital side to ensure that a Stenhousemuir victory will take them into the final playoff place.

The Warriors are undefeated against The Wee Rovers this season with 2 wins and a draw to show for the 3 fixtures.

Be sure to check our socials on Friday for our full preview.

Both Peter Urminsky and Tam Orr are both expected to return to the squad.

Our Ladies Team finished their season last week with a 3-1 victory against St Mirren.

The Ladies Team will be back next year with some exciting changes to look out for during the close-season.

We’d like to thank all our squad for all their efforts this season and look forward to seeing what they can bring to the table next season. 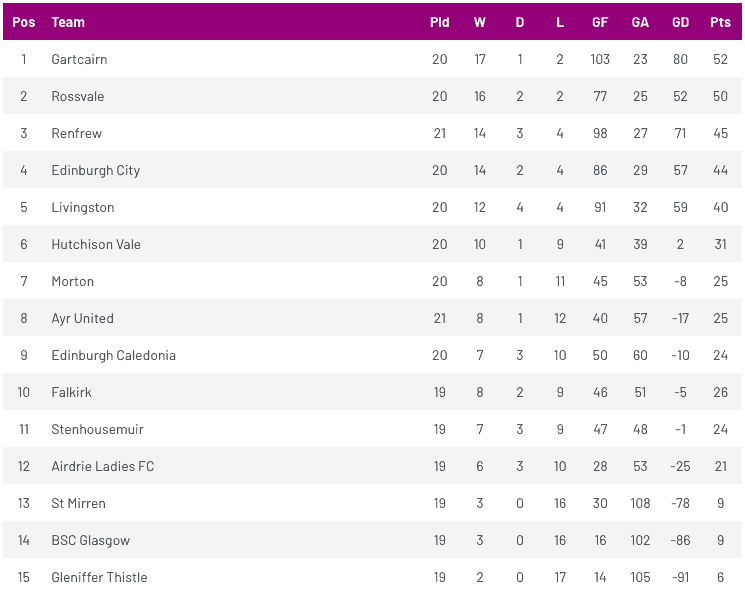 The Scottish FA says it is “overwhelmed” by the generosity of fans after the March friendly against Poland raised £500,000 to help the children of war-torn Ukraine.

Further cash was raised through text donations plus contributions from some of the SFA’s commercial partners.

The match replaced World Cup semi-final play-offs on 24 March, with Ukraine unable to travel to Scotland and Poland’s opponents, Russia, thrown out of the competition following their country’s invasion. 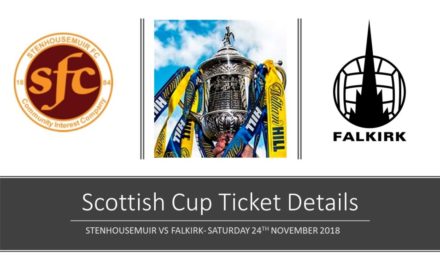