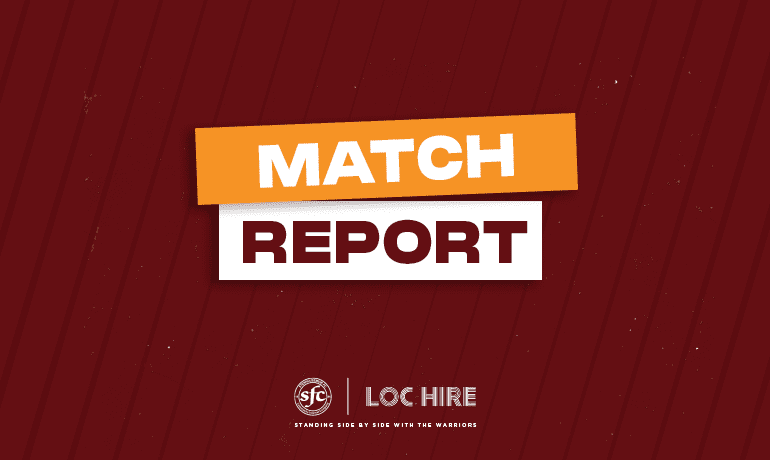 The Warriors defeated an in-form Albion Rovers side 3-1 at Ochilview to move up to fifth place in League 2.

Stephen Swift’s side started like a team full of confidence and Euan O’Reilly opened the scoring after only three minutes. The winger found space and drove into the box, finishing past Cammy Binnie.

Rovers looked to have found a quick equaliser when striker Max Wright evaded the attention of Stenny captain Sean Crighton but he scuffed his effort into the ground.

With both teams adopting an attacking approach there were plenty of chances and Charlie Reilly was the next to go close for the away side as his long range shot shaved the post.

Brian Reid’s side netted a deserved equaliser when Reilly’s trickery was too much for Michael Miller and he darted into the box and finished expertly, chipping David Wilson.

The visitors were in the ascendancy and Jamie Leslie was next to trouble the Warriors defence, the midfielder was given space to shoot outside the box and his shot narrowly missed the target.

Wright missed a gilt-edge chance when he only had David Wilson to beat but the goalkeeper made a superb save with his feet to keep the score level on 38 minutes.

Crighton’s quick thinking nearly gave Swift’s side an early second half lead with a free kick finding O’Reilly in behind, the winger fired an effort wide.

Leslie then went close up the other end with a similar chance from a wide free kick, heading over the bar on the hour mark.

Motherwell loanee Corey O’Donnell nearly scored a sensational goal with his backheel flick from Lynas’ cross nearly catching out Wilson at his near post.

Stenhousemuir were rewarded for keeping Rovers at bay when they retook the lead on the counter attack. Substitute Cammy Graham found space in the box and directed a cross past Binnie on 65 minutes.

Rovers nearly levelled the tie again when Reilly hit a fierce long range drive that was deflected at the last moment by Jamieson with the shot heading goalbound.

Stenny sealed the three points ten from time when captain Crighton poked home from close range after Binnie fumbled the ball in the box and gave the defender an open goal.

The second half saw a vast improvement from the hosts and allowed them to pick up an important victory as they look to push up the table.

Man of the Match: Sean Crighton

Michael Goes Out On Loan