As we are already well into the current season, I felt that this was a good time to provide another update for supporters.

Starting with first team football, it has been a mixed start to the season.  We started with the Betfred League Cup and we acquitted ourselves well in the group stages.  Supporters will know that we had one of the toughest groups with both Dundee United and Hearts as opponents.  However, we competed well in both fixtures and if we could have blown the final whistle at Tynecastle after 80 minutes, we’d have left as winners.  However, overall, we did manage to finish the group in fourth spot which helps bring in a little extra finance into the club.

In terms of the league, we’re not going to pretend that we are satisfied to be sitting in 8th spot.  We wanted a stronger start, but our performances have been mixed.  No-one is more aware of this than the Manager and players.  They are committed to improving performances and we’ve certainly seen better football over the last couple of games.  There is a long way to go in the league and we all know where we want to be.

In the Challenge Cup, now the Tunnock’s Caramel Wafer Challenge Cup, we entered the contest at the second round and we’ve won through two rounds thus far, beating both Edinburgh City and The New Saints.  We welcomed The New Saints to Ochilview as the first non-Scottish Club that Stenhousemuir has met in a competitive fixture in our 135 year history.

We went into the game as underdogs, as TNS have won the Welsh Premier League a record 12 times, including 8 titles in the past 8 seasons.  However, we competed well against our fulltime opponents and secured the win after some penalty shoot out heroics from Graeme Smith in goals.  There were plenty of other noteworthy performances in the game including Thomas Halleran in the midfield.

We now go into the fourth round with another home tie against another non-Scottish side, Waterford, from the League of Ireland.  Once again, we’ll be looking to give them a good Scottish welcome and have high hopes of another strong Warriors performance.  As I write this, we can now reveal that the match has been selected by our TV partners to feature on BBC ALBA on Friday 11th October at 735pm.  I appreciate that different kick-off times can sometimes be controversial amongst supporters.  However, the decision on which games to feature and the dates and times is solely in the hands of the TV companies.  So our job now is to work hard to get a good crowd along and aim to win and advance to the quarter finals.

On the financial side at the club, we have had a good first few months of the year.  We are on budget with our income and expenditure at the club and in a good place.  As I have set out before, we are aiming to continue to grow as a club, but in a measured and sustainable way.  Not only does this mean making increases to the available first team budget, but it means improvements to the structures within the club and the club environment itself.

Over the past few months we have undertaken a number of different projects around Ochilview.  This has included a significant job refurbishing the original wall at the main turnstiles.  This is the first impression people have of the club and we wanted it to have an impact.  The area behind the turnstiles has also been completely repainted as have a number of other areas around the place.  I’d like to make particular mention of Bill Reid who takes on many of these jobs for us.  Bill patiently works away repainting and repairing around the club and we can’t thank him enough for his efforts.

We’ve also completed some work to the main entrance hall, and are about to carry out a few jobs in the Bob Hill Wee Bar.  Whilst these jobs will make a big difference and are visible for all to see, we’ve also completed a number of other jobs that are less obvious but just as important.  This included a full replacement of all internal and external safety and stand lighting, as well as re-netting the entire main stand.  These jobs had to be completed to comply with safety regulations.  I’d like to thank the Scottish Football Partnership, and our own Supporters Trust for their financial assistance in helping to fund the lighting and netting repairs.

We’ve had some fantastic help from volunteers to help with other essential repairs and to tidy up the garden areas.  This help has been invaluable and shows the strong community spirit we have in the club.

So many of the projects listed above were only able to be undertaken thanks to the generosity of a lot of businesses and individuals who have donated materials, time and money.  There are too many to mention, but we are grateful to each and every one of them.  We have further projects that we are working on at the moment and we hope to be able to give further details on these in the very near future.

We’ve also been piloting opening the Bob Hill Wee Bar at half time during matches.  This of course still complies with relevant legislation concerning the consumption of alcohol at football grounds and sensible drinking policies remain in place.  However, the pilot is designed to see if fans would welcome this addition to match days and test the logistics of its operation.

In terms of our community programme, our new partnership with Your Equipment Solutions has enabled us to expand our programme and offer new benefits to existing participants.  Whilst much has been said about the cost of football in the last week or so, we have just launched a free football programme for 12-16 year olds on a Sunday evening.  We are continuing with our free season tickets for under 16s, and we have brought back the Rewards Scheme to encourage attendance at first team matches.  We have launched a new Coaching Academy to find, train and upskill a number of young people in our community.

Our Head of Community Football Will Hoggan recently left his post to move on to a new challenge.  Will achieved a great deal in his time at Stenhousemuir FC and we wish him well.  We are already progressing a new appointment to fill this gap in the team.

So, there’s a lot going on, and we remain committed to continual improvement on and off the pitch.  As ever, if anyone has any feedback or other ideas that we can consider, then do please make contact and let us know.

Good luck to all teams associated with Stenhousemuir FC for the next series of matches. 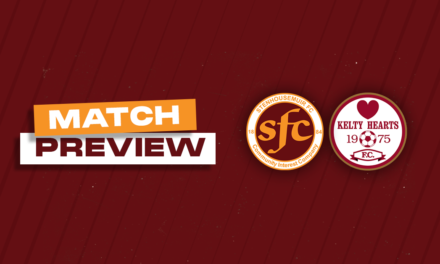