I wanted to provide a short update for supporters as we near the end of the calendar year.

On the first team football side, in my previous update in October, I stated that the Board was monitoring and reviewing the progress and performance within the first team.  Ultimately, it was felt that we were not making the desired progress in this area and that a change was needed.  This resulted in the Manager leaving his position.  This was a difficult decision to reach.  I’d again like to pay tribute to Brown Ferguson and his assistant Jim Paterson for their dedication and effort, and all that they achieved for the club.

Colin McMenamin was appointed as Manager just over a week ago, and this represents his step up into management.  Colin has been a part of the club since 2014 and his passion and commitment to the club has always been there for everyone to see.  He has his own ideas regarding how he wants to shape his team, and I know that he has already received a lot of encouragement from supporters – as well as some useful tips!!  It will take time for Colin to get the team playing the way he wants them to, but he will have the full support of the Board as he aims to take the team forward.  We have already agreed to make additional funds available to him for the January window.

We have been able to offer additional funds due to strong financial performance across all parts of the club.  We continue to operate ahead of budget on the commercial side of the club.  Recent good results in the Scottish Cup should also impact positively on the financial position.  We have been delighted to forge new partnerships with a number of new sponsors and their support is very much appreciated.  I’d ask all supporters to take a look at the advertising boards around the pitch, and to take notice of our kit and web sponsors.  Please give these businesses and individuals your support when you can.  They are supporting us, we should try and support them too.

In the community side of the club, our Walking Football team recently ended a successful campaign where they finished in the top half of the table for the National League Trophy.  We’ve also had young players from within the community programme move up in to academy football.  A few days ago we also announced that Tiwi Daramola has signed for our first team.  Tiwi, who is just 17 years old, first joined Stenhousemuir when he was 5.   He progressed from the Young Maroons , through all age groups within the club’s pathway and has now joined the first team. It is a remarkable journey for the youngster and shows what is possible at a community club like Stenhousemuir.  He will initially go out on loan to continue to build and develop his experience, but he will now be training with the first team and in and around that environment.

Outside of Stenhousemuir, we continue to play our part in shaping Scottish football.  We provide input at various levels within the SPFL and Scottish FA.  In particular, we try to gain more respect and resource for teams in Leagues 1 & 2, whilst ensuring that the game across all levels continues to grow.

We have a number of games to play before Christmas, so I hope to see as many fans as possible at all those matches.  The full support we had against Falkirk in the Scottish Cup shows how it can energise the team.

Thanks for your support for the team throughout 2018. 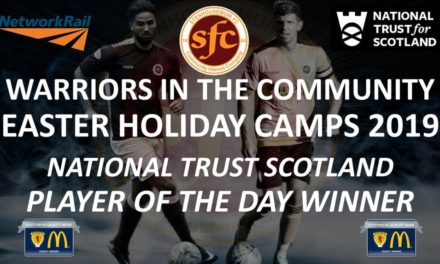