Stenhousemuir FC FFIT were drawn in Group 4 with Hibernian FC FFIT, Cowdenbeath FC FFIT and Kilmarnock FC FFIT.
Paul Wilson, Senior Community Coach attended the tournament with the team and had this to say: "We lost our opening game 1-0 against Cowdenbeath FC FFIT as we approached it entering the unknown as we had never played against another FFIT team before.  The second game was a good 2-1 win against Hibernian FC FFIT before a 3-1 victory against Kilmarnock FC FFIT meant we finished second in our group, behind Cowdenbeath FC FFIT.  The guys were delighted to have qualified from the group as we had never played 7-a-sides before.  We played out a very tight match with Hamilton Academical FC FFIT, but unfortunately Hamilton scored the only goal of the game with a minute to go.  All SFC FFIT players were pleased with how the day went and enjoyed the festival – the weather definitely helped!" Stenhousemuir supporter and FFIT team member Andy McPhate added "it was a gerat day and a great effort by the guys, in particular Brian Howie who turned back the years in goal".
The eventual winners of the festival were Swindon Town FC.  We would like to thank everyone involved at the SPFL Trust for organising such a fantastic event.
Jamie Kirk, Community Development Director, commented "the FFIT programme is vital to our Warriors in the Community Programme and I couldn't be happier with our first intake.  The fact that our group still meets every week as a legacy to the programme is testament to it's success.  The most refreshing thing for me is hearing supporters speak so positively about playing football and representing their club".
If you would like to join the waiting list for our next FFIT delivery, please get in touch at community@stenhousemuirfc.com or call the office on 01324 562 992 for more information. 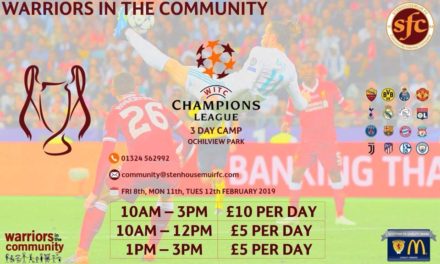 Warriors in the Community: Boys and Girls Open Days Reminder