Football fans will be spoiled for choice at Ochlview this coming season.  With East Stirlingshire exiting the professional leagues and moving on to play their Lowland League fixtures elsewhere, a number of new season long deals have been struck with new teams looking to make Ochilview their home.

Stenhousemuir Amateurs will be taking up a new Saturday slot at Ochilview, playing on weekends when the Stenhousemuir first team are playing away from home.  An all new second Stenny Amateur team will also be starting a regular Sunday booking too.

We also welcome Carronvale Amateurs and the Scottish FA Cerebral Palsey teams to Ochilview for the season ahead.  All of these teams have signed season long deals to make Ochilview their home.  Talks are ongoing with a further two sides.

A club spokesman said, “With the Shire moving on, we saw an opportunity to offer their regular slot to another local side.  Before long, we had a number of teams interested and we were delighted to negotiate match dates and times to accomodate as many of these teams as possible.

This is good financially for Stenousemuir Football Club, and it also helps establish Ochilview as the place for football in 2018.  As soon as all fixtures are released, we’ll publish details of the regular pattern of games across each weekend.

With our current community football programmes attracting over 500 participants each week, our current first team in men’s and women’s football, our younger teams, and now this group of amateur teams moving to Ochilview, it really establishes us as a true community sporting hub.” 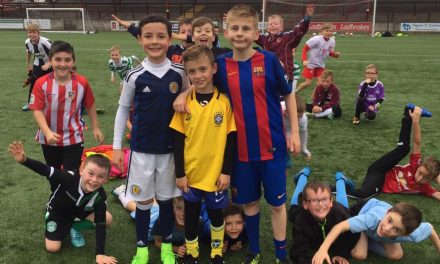