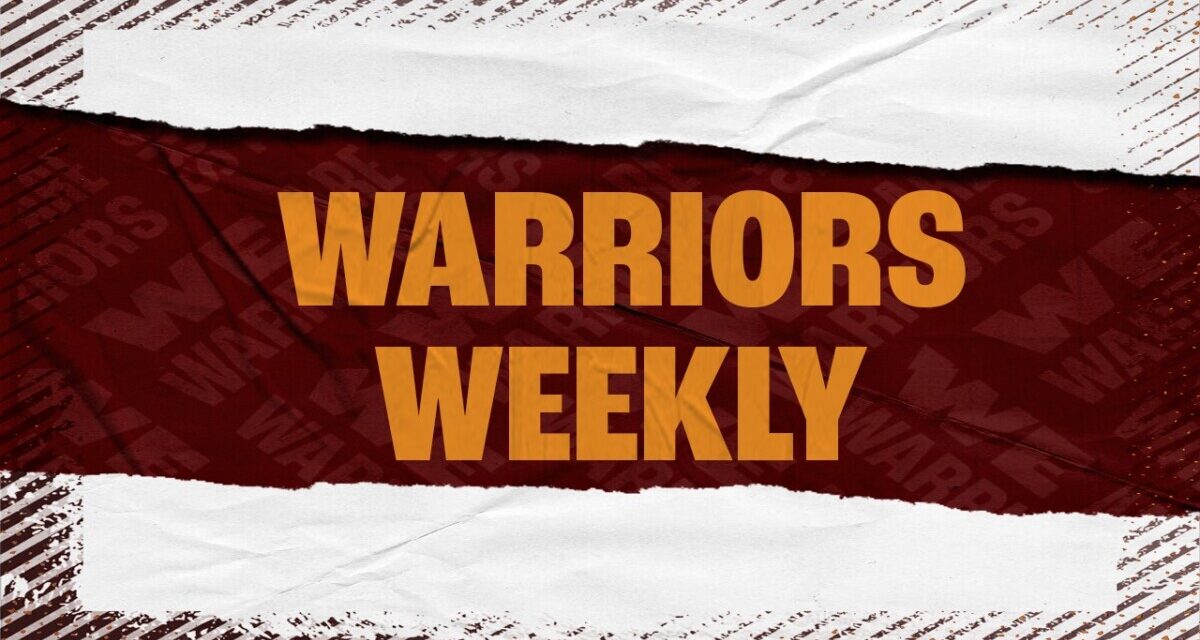 Hello and welcome to another edition of Warriors Weekly. Before we start, we would like to wish everyone a Happy New Year! 2023 has started off positively for the Warriors, with a new Men’s First Team Manager being named. Read on to find out more! 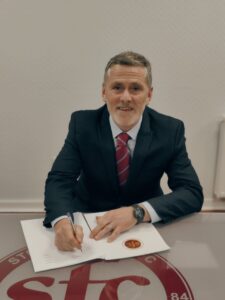 Chairman, Iain McMenemy said, “We’d like to welcome Gary on board and look forward to working with him as we look to get our season back on track. We’ve had a disappointing first half of the season, but there’s still time to get ourselves up towards the top end of the table and challenge for promotion.  Gary was very passionate about wanting to come in and work with the boys to bring out their potential and so we’re looking at the second half of the season with renewed optimism.”

Naysmith, who played as a left-back or left-winger, started his senior career with Hearts. He then moved to England to sign with Premier League club Everton, where he stayed for seven seasons. Naysmith was capped 46 times by the Scotland national team between 2000 and 2009. After spells with Sheffield United and Huddersfield Town, Naysmith returned to Scotland with Aberdeen and finished his playing career at East Fife.

Naysmith was appointed East Fife player-manager in December 2013. He then went on to manage Queen of the South and Edinburgh City.

Speaking to Warriors TV, Gary said “I am delighted to be appointed as manager of Stenhousemuir Football Club. It’s great to be back in football and at such a progressive club with a great structure behind the scenes. Brown Ferguson will join me as Assistant, he knows the club well having been here as a player and manager and we’re looking forward to the challenge ahead”

Gary will take his first training session tonight and will take charge of his first game for Stenhousemuir on Saturday against Stranraer.

Iain McMenemy added, “I’d also like to thank Sean Crighton for stepping in to take the team over the past few weeks.  As expected, Sean approached this with utmost professionalism.  Finally, I’d like to thank out Football Working Group for managing the interview process.”

WarriorsTV also recorded an interview with Gary, which you can find HERE 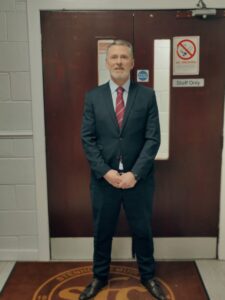 As mentioned, Brown Ferguson will join the club as the Assistant Manager. Brown, or Bomber as he is also known as, joined the club as a player in 2011. He moved into more of a coaching role as the years progressed before being named as Caretaker Manager in 2014, before Scott Booth took the Managerial role. Bomber once again was named as Caretaker Manager following Booth’s departure and was eventually given the role permanently. Brown oversaw the club’s recent promotion in 2017/18, where the side won the playoffs, defeating Peterhead 2-1 over two legs in the final.

We would like to welcome both Gary and Brown to the Warriors!

Our final match of 2022 saw us make the short trip to Forthbank to take on Stirling Albion. It was our first competitive match in 3 weeks with the postponement of the Dumbarton match a free weekend over Christmas, meaning this was Sean Crighton’s second match in charge of the team.

Sean made a few changes from the side that lost 2-1 to Forfar with Conor Brennan, Callum Yeats, Michael Anderson and Adam Brown being replaced by Jay Cantley, Nicky Jamieson, Scott Walker and Will Sewell in the starting XI.

The Warriors would have the first chance of the match. A free kick was swung in by Matty Yates, finding the head of Nicky Jamieson. The defender headed onto Thomas Orr who struggled to get a shot away before eventually firing wide.

From the goal kick, Ross McGeachie broke down the right wing for the hosts before finding Dale Carrick in the middle. Carrick got a shot away but struggled to test Cantley in the Warriors net.

Shortly after, Carrick turned provider, as the Warriors struggled to deal with a crossed ball. Carrick got the ball on the edge of the box, laid of Ross Davidson who fired Stirling 1-0 ahead with 12 minutes on the clock.

It could have been 2-0 just minutes later. A corner found the head of a Stirling Attacker, who steered the ball towards goal. If it wasn’t for Will Sewell standing on the line, it would have been a tough task for the Warriors to recover early doors. Following a bit of a stramash in the box, the ball eventually went out for a goal kick.

In the 19th minute, the game was level. Following a prolonged period of attack from the Warriors, a Euan O’Reilly cross was parried by Currie straight into the path of Will Sewell, who notched home his 6th of the season.

Another corner caused issues for the visitors, following a ball into the back post, the ball found its way back to the front post, where ex-Warrior Robert Thomson was on hand to dink the ball over the defender into the back of the net. 25 minutes in and it was 2-1 Stirling.

Crosses seemed to be causing issues for both sets of defenders as O’Reilly’s cross wasn’t properly cleared, allowing Adam Corbett a free shot on goal. Luckily for the Binos, the right back fired narrowly wide of the target.

The first chance of the second half went the Warriors way. A cross from Sewell wasn’t met in the box by Orr, but the number 9 chased down the ball before laying off Ross Philp, who went for placement over power, forcing the keeper into palming the ball wide to prevent the ball nestling in the top corner.

A double change for the Warriors saw Matty Yates and Thomas Orr being replaced by Adam Brown and Niyah Joseph. Once the play got underway, Stirling quickly broke from their own half and switched the ball to the right wing. The ball was crossed into the box, where Dale Carrick would fire home to make it 3-1 with 64 minutes played.

That goal seemed to take the sting out of the game, with the Warriors chasing the match for the last 25 minutes. It was close to being 4 as Josh Cooper found himself one on one with Cantley, but the young keeper done well to deny a fourth goal.

It was almost a goal back for the Warriors as Niyah Joseph battled off a challenge from a player in red before firing a shot towards goal. His shot ricocheted off the post before being cleared for a throw-in.

That would be the last chance of the match, as the Warriors ended 2022 in defeat.

WarriorsTV spoke with Sean Crighton and Will Sewell following the match. Highlights from the match can also be found HERE

It’s the first match of the new year up next as we welcome Stranraer to Ochilview. It will also be Gary Naysmith’s first match in charge of the Warriors.

We’ve already faced the Blues twice this season, with a 3-1 win at Ochilview in September and a 3-2 defeat at Stair Park in November. The home match was our last home league win, with one home win coming in the Scottish Cup since then.

Admission for Saturday’s match is set at £14/9/5, with tickets being available to purchase through the Fanbase app. Alternatively, you can pay at the gate. 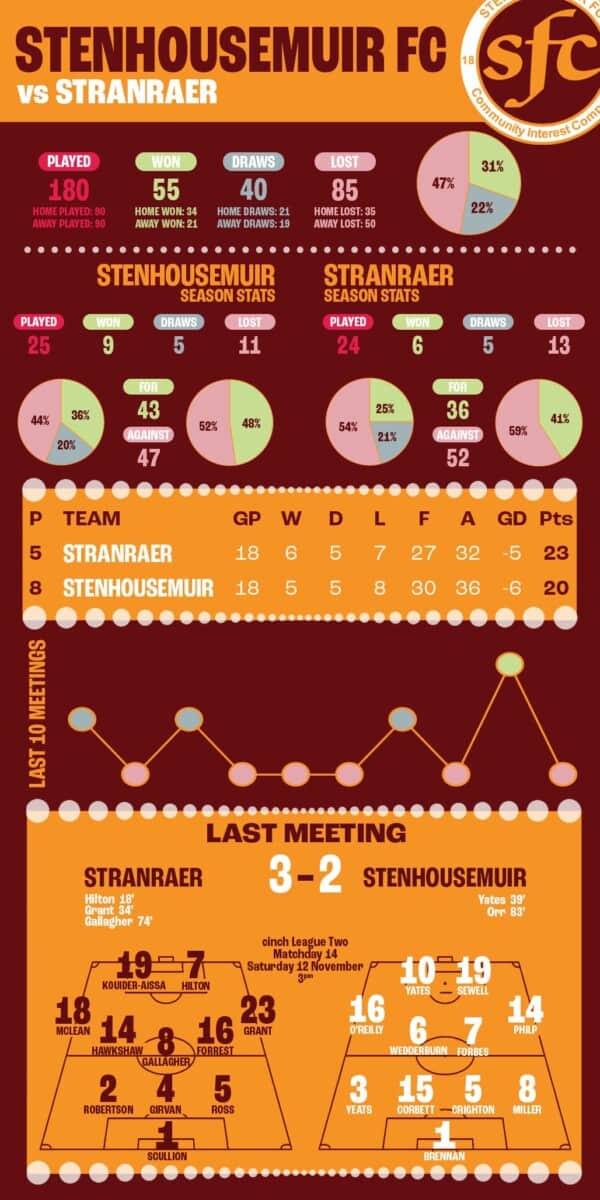 BOYS TEAMS PLAYER RECRUITMENT
We are looking to start 2023 with a bang!
We are looking for players in the following age groups to be apart of one of the best Community Programmes in the region!
We have spaces from our Super 5s which are our 2015s age group to our 2006s 11 aside squad!
Please email : Daniel.newbigging@stenhousemuirfc.com for all enquires. 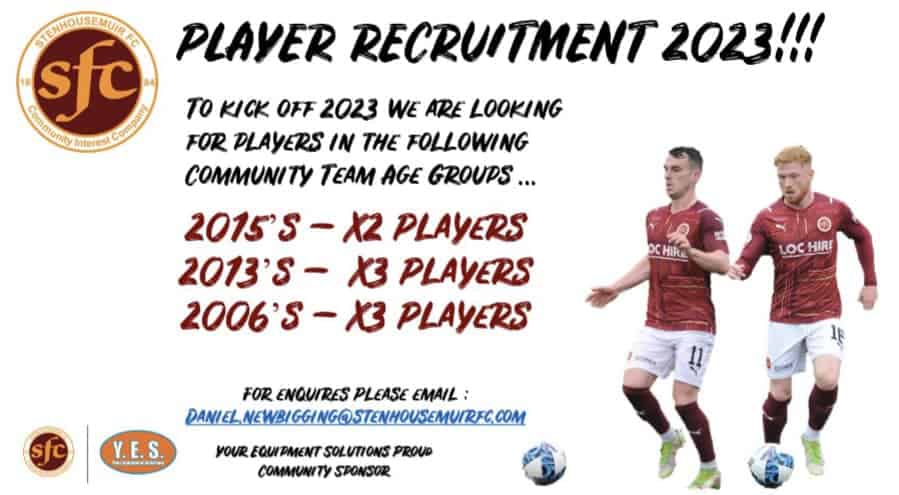 GIRL’S TEAM PLAYER AND COACH RECRUITMENT
We are still looking for new players to join our U12 9v9 squad for 2023.
We also require a new head coach to lead the team!
Please contact Bailey.hanlon@stenhousemuirfc.com for more information 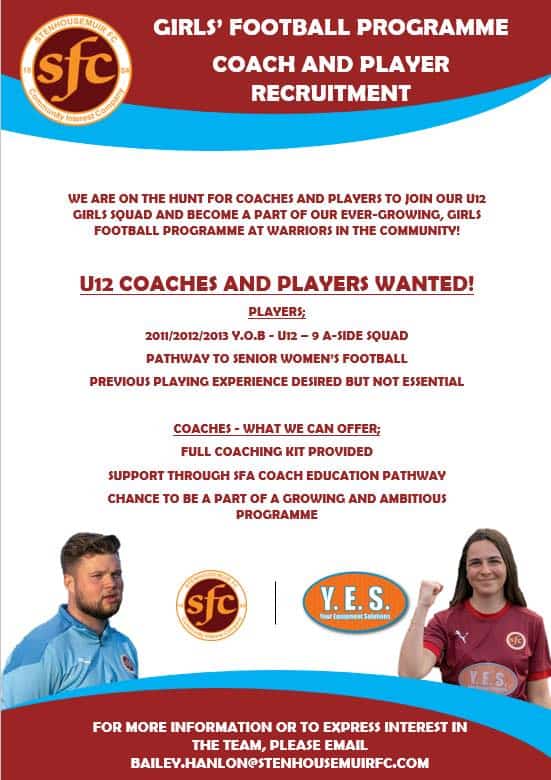 As It’s January, the transfer window is open once again. One major deal happened just before the turn of the new year though. Following his release from Manchester United in November, Cristiano Ronaldo has signed for Saudi Arabian side Al Nassr. His deal is believed to be worth over £170 million a year! Whilst his first appearance in a Al Nassr was met with much fanfare, despite a match not even taking place, Lionel Messi quietly returned to training at PSG following Argentina’s World Cup win last month. 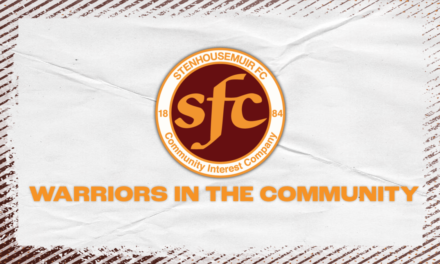