Welcome to the final Inside Ochilview of the Season.

We’ll take a few weeks break and then we’ll be back as we look to prepare for the new season.

Be sure to keep an eye out on Social Media as Stephen Swift looks to build his squad for next Season. We’ll post all the latest news as it happens.

Swifty kept the same starting XI from the team that gave a dominant 25 minute start against Albion Rovers. The boys know 3 points is vital following Edinburgh’s victory the previous night.

The Warriors started strong again and had the first glimpse of goal inside 5 minutes. Euan O’Reilly managed to find himself some space at the edge of the box, but his shot was just dragged inches wide.

The home side picked up the first corner of the match. Adam Brown played a splendid chipped through ball to Daz Christie, with the defender making a vital clearance. It was Brown that took the resultant corner which was met by Adam Corbett, but his attempt was wildly over.

It was Stranraer that had the first attempt on target, but Peter Urminsky in the home goal was equal to the shot.

It took until 20 minutes for Stenhousemuir to get their first shot on target Robert Thomson picked up the ball on the edge of the box from Adam Brown. He cut into his favoured right for, but his shot was straight at the keeper.

GOAL: Against the run of play, Stranraer whipped in a cross to the back post following a short corner. Craig Ross met the header and Urminsky had no chance as it went in off the post. [STENHOUSEMUIR 0-1 STRANRAER, Ross, 23 minutes]

GOAL: An error at the back by Corbett allowed the Stranraer attack to pick up an easy pass. James cked his spot form the edge of the box to double the visitors lead. [STENHOUSEMUIR 0-2 STRANRAER, Hilton 28 minutes]

The Warriors look deflated at the second goal and Stephen Swift is already looking at his bench.

SUBSTITUTION: Stenhousemuir are forced into a half time change with Ross Lyon going on for the injured Adam Corbett.

Tam Orr gets the 2nd half underway. Any less than 2 goals, and The Warriors promotion hopes are done.

SUBSTITUTION: Callum Yeats afternoon is over as Swifty loses another player to injury. Ross Forbes is his replacement.

Big chance for The Warriors as Ross Forbes hits a free kick that’s inches over the bar.

Stranraer are trying to slow the game down at every opportunity with their goalkeeper already picking up a booking for time wasting. Nothing is sticking for The Warriors though and are in danger of seeing the season fizzle out.

Great chances for The Warriors as Ross Lyon passes through to Thommo. his excellent touch takes him away from the defence. His cut back was aimed at Tam Orr, but a great interception by the defence prevented it from hitting the target.

Desperation defending from the visitors as Euan O’Reilly breaks free in the box, the Stranraer defence stands tall though and are blocking everything that comes into the box.

GOAL: A breakaway by Stranraer with Nicky Jamieson getting caught out in the middle of the park. James Hilton collected the ball inside the box and drilled his 2nd of the match past Peter Urminsky. [STENHOUSEMUIR 0-3 STRANRAER, Hilton, 67 minutes]

SUBSTITUTION: Final changes for The Warriors with Cammy Graham and Mikey Anderson coming on for Euan O’Reilly and Nat Wedderburn [73 minutes]

GOAL: The Warriors get one back as Adam Brown picks up a cross from Ross Lyon inside the box, he twists and turns and drills the ball into the far post. [STENHOUSEMUIR 1-3 STRANRAER, Adam Brown 79 minutes]

The Warriors almost get a quick second with Nicky Jamieson meeting a back post header, but the ball ended up just wide.  Quickly followed by another cross across the box was cleared by the defence. And shortly after that, a Ross Forbes free kick causes problems in the box. Nicky again getting final header, but well over this team.

RED CARD: Urminsky picks up his second yellow card following some play acting by the Stranraer attack. Ross Forbes takes the gloves as Stenhousemuir are out of subs. [90 minutes]

The Warriors make the trip north in our final match of the season to play promotion chasing Forfar Athletic.

Stenhousemuir have had the upper hand on the Angus side this season with a draw and 2 victories. However, it’s Forfar that have had the better season and find themselves in the promotion playoffs.

For Stephen Swift’s side, it’s a chance to close an ultimately disappointing season. The boys have looked great at times, but there’s been an inconstancy that’s cost a place in the playoffs.

With the skeleton of the side already having agreed contracts for next season, the foundation has been set and the League Championship will be on everyone’s mind for next season.

Peter Urminsky will be unavailable due to suspension and he will return to his parent club this week. Big Peter has been immense since he came to the club and surely has a bright future. We wish Peter well and look forward to tracking his progress.

The supporter’s bus will be available and you can book your place by contacting Andy McPhate on Twitter.

This week, we announce that Adam Corbett and Mikey Anderson have agreed to extend their stay until next season.

Adam has been phenomenal in his conversion into a goal scoring right back. He’s become a key factor in our excellent defensive group and we look forward seeing Adam continue his development and seeing what the big man has in store for us next season.

Mikey is another player that’s impressed since the turn of the year. He’s turned into a vital part of Stephen Swift’s squad and his youthful energy perfectly complements Nat Wedderburn in the middle of the park and allows big Nat to run the show. He’s scored a few screamers in friendly matches, but has yet to find the net competitively. If he can add those goals to his game, he’ll be sure to move up the leagues, and hopefully with The Warriors.

Stephen Swift has been speaking to the squad over the last few weeks. Keep an eye on our Twitter channel over the next few weeks and we’ll announce player news as soon as it’s available.

NAT PICKS UP SUPPORTER’S PLAYER OF THE SEASON

Big congratulations to Nat Wedderburn who has picked up our Supporter’s Player of the Season. It was a close call between Nicky Jamieson and Nat, but ultimately, Nat won out.

A big thanks to everyone that voted. We’ll announce our Player’s Player of the Season next week.

Congratulations to Nat, to Tam Orr [who will likely win top goalscorer unless Forfar manage to finally be able to stop Adam Corbett from scoring against them!] and to James Lyon who picked up the Goal of the Season for his stunning strike, and our very first goal this season, against Dumbarton way back in July. 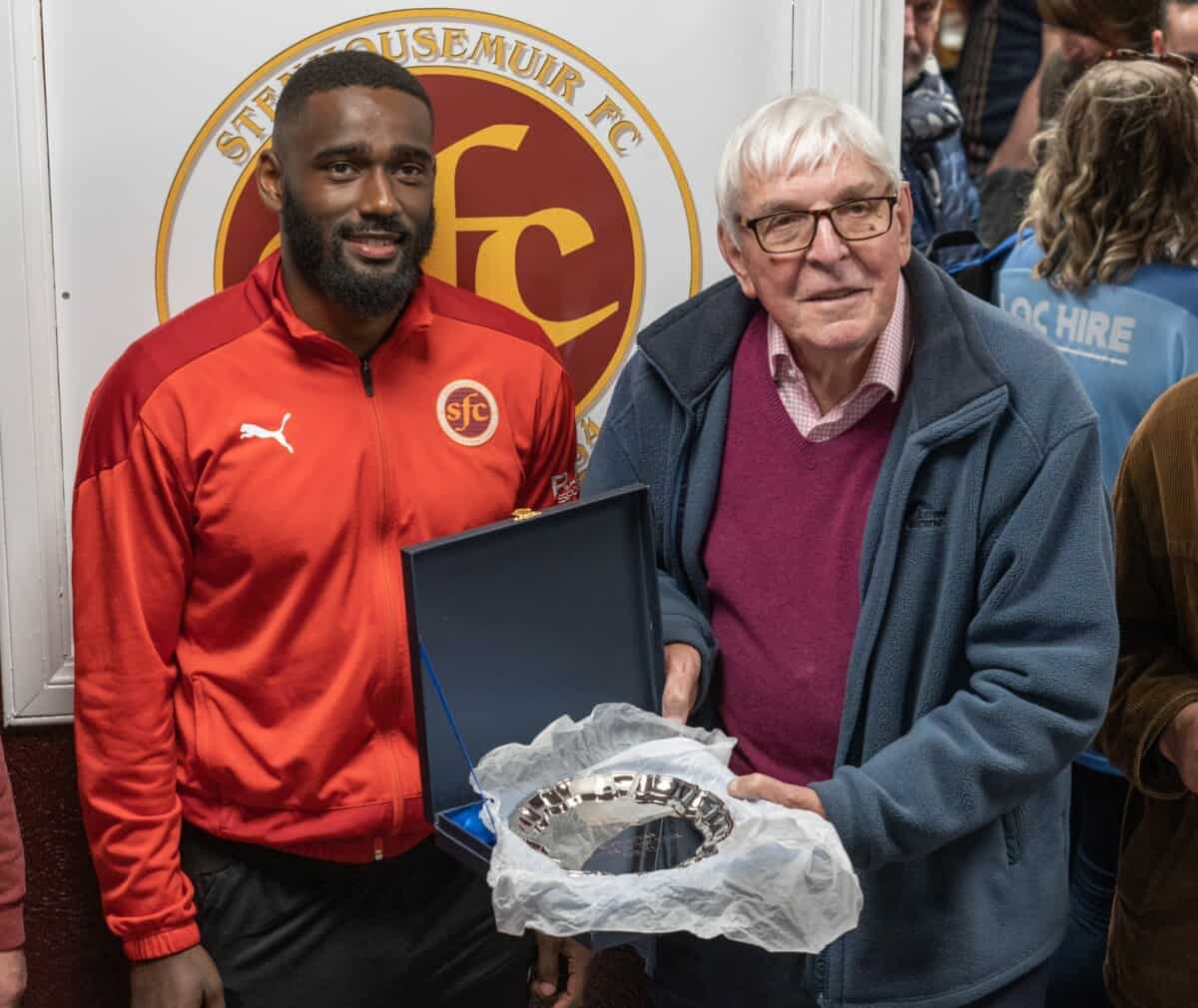 Those of you that follow us on Twitter will be no strangers to our Wallpapers that are released every Wednesday. We’ll take a break from those too, but we’ve uploaded all the Wallpapers onto our Facebook page, and you can download your favourite here.

We’re always look for ways to improve our Media output. If you have any ideas, or would like to join our media team, please feel free to contact Ian.fitzpatrick@stenhousemuirfc.com with any suggestions.