The Warriors travelled north to the second time in successive weeks, this time to take on high flying Forfar at Station Park. Our hosts were on good form, winning their last 4 league games and being undefeated at home this season. The last time the sides met, it resulted in a 1-1 draw at Ochilview with Sean Crighton netting a late equaliser. That started The Warriors on a 6 game unbeaten run. A win or draw today will see them reach half of that, after two successive 2-2 draws.

Stephen Swift named an unchanged side for the first time this season, although Cammy Graham and Mikey Anderson both dropped out of the matchday squad.

The Warriors started strong and their first chance came inside the first couple of minutes with Ross Forbes having the games first shot on goal, but it was well wide of the keeper’s left hand post.

Just a few minutes later, Forbes was able to to whip a free kick into the area. The ball seemed to miss everyone ad hit the back post, but it fell perfectly to Adam Corbett who was never going to miss from a few yards and The Warriors defender found the back of the net with his, and the games, first goal. 0-1 to Stenhousemuir in just 5 minutes.

It only took a few minutes for The Warriors to have another chance. More great link up play between Forbes and Christie saw the ex-Pollok man drag his shot wide. Stenhousemuir can feel there’s goals to be had, and Forfar are struggling to keep up the visitors intensity.

However, it was Forfar next to find the back of the net. A well worked corner kick routine saw the ball drop to Fisher on the edge of the box. He pinned and struck the ball over the defence and keeper and ended up in the back of the net. Stunning goal, but disappointment for The Warriors who find themselves level. 1-1 after 11 minutes.

Daz Christie had the next chance as a botched clearance from the Forfar keeper fell straight to him, but the winger couldn’t get proper contact and the shot was easily dealt with.

It wasn’t long before The Warriors regained the lead. Some excellent determination by Orr won the ball back. He set up Wedderburn who in turn laid it out wide to Ross Forbes. Forbes’ wicked cross was missed [or not missed according to Tam] by Tam Orr and it found it’s way into the far corner of the goal. They can debate the scorer, but the main thing is that The Warriors lead, and it’s 1-2 after 24 minutes.

There would be no question of goalscorer for the next chance as Tam Orr was through on the keeper, but with 2 defenders on his heels, the striker struggled to get his shot on target.

Warrior’s third goal was Goal of the Season contender. Not for the finish, but for the excellent build up play. Ross Lyon picked the ball up wide left in his own half and passed the ball inside to the impressive Forbes. He played a quick one-two with Orr before passing the ball into Daz Christie who controlled well and managed to find Forbes who had made an unmatched run forward. Forbes powered into the box with the ball and his clever back heel was met my Corbett who took one touch to control and take the keeper out the game, and a second touch to score his second of the game. 32 minutes gone and it’s 1-3 to Stenhousemuir.

Ross Lyon was next to drive forward, he skipped between two defenders in the box, but the third was having none of it Ross was fouled. Penalty to The Warriors! All eyes were on Adam Corbett, but the big defender stayed back to allow Ross Forbes to take the kick with no drama. It was a good choice and Forbes got his second of the day and The Warriors fourth! 43 minutes played and it’s 1-4 to Stenhousemuir.

Stenhousemuir started just as strong in the second half, and Sean Crighton managed to get his header over the bar.

Unfortunately, that wasn’t a sign if things to come. Some clever work in the Forfar midfield saw the ball fall to Shepherd after a neat run. His shot wasn’t matched by Wilson and after 54 minutes, Forfar are back in the game at 2-4.

It was imperative that the visitors regained control of the match, but they were starting to struggle with Forfar’s game plan. Their next chance came in 57 minutes when there was a proper stramash in The Warriors box. The ball eventually fell to Munro and he made no mistake as he slammed the ball home. This is more like the Forfar side we were expecting and two quick goals piles the pressure onto Stenhousemuir as it’s now 3-4.

After conceding consecutive late equalisers, The Warriors’ fans were hoping to keep this game under control.

It came to the 90th minute with Forfar getting a corner and their keeper being sent up. Visions of Elgin City came flooding back but this time it wasn’t to be as The Warriors cleared their lines and held off for an impressive 3-4 win.

Now that our heart rates are back to normal, we can look ahead to our next match, the first of 2022, against local rivals Stirling Albion.

The Warriors are undefeated in 3 with 2 draws and a win. Stirling, on the other hand, have lost their last 7 league games. A run that started with a 3-1 Stenhousemuir win at Forthbank on 6th November.

Robert Thomson, Dec Hughes, Graeme Smith and Jon Craig continue to be ruled out and Nicky Jamieson is also missing through injury.

Tickets are available now on FanBase and this is your best option to ensure your entry to the match given Government restrictions. You can purchase tickets online HERE. If there are any tickets left on FanBase, we will accept Pay at the Gate, but we can not guarantee that these will be available. We will confirm on Sunday morning whether or not Pay at the Gate will be available. Again, we highlight recommend purchasing tickets on FanBase to avoid any disappointment.

As always, the game will be available to view on Warriors TV with commentary from Cameron McIntyre. You can purchase this for £10 HERE.

Match Entry: FanBase is the only way to guarantee access to the game. You can purchase your ticket in advance by using Fanbase. Adult admission costing £14, concessions £9 and under 16’s just £5.

Face Coverings: Face coverings are not mandatory inside the ground but fans are encouraged to continue to wear these. Masks must be worn when moving around the ground.

Covid Secure: Please ensure that you are following all safety guidance when visiting the ground. If you’re feeling unwell or are showing symptoms, please do not attend. You should also take a Lateral Flow Test before attending any crowded places.

On joining the Goldline Community Sports Lottery you will receive your unique Membership number(s) corresponding with the entry level you have selected, after having received it you will be entered into the Monthly Draw for cash prizes.. Winners are announced every month and you if you win the money will be paid directly into your bank.

We’re now halfway through the League Season and we’ve taken a deep dive into the 39 goals that have been scored this season so far. You can check out everything that you need to know below…

We caught up with our Physio Jenna Orr last week to get an update on some of the players that we have out injured at the moment.

Obviously Buzz has been out with a long term injury and it will be some time still until we see him back on the pitch.

Jon is now back with Kilmarnock for treatment and has the same problem with his shoulder blade. It’s not looking good and I doubt we’ll see him back anytime soon.

Nicky has a tweak to his medial ligament in his knee and we’re looking at another three weeks before he’s back.

Thommo has COVID and that’s put his rehab back a week. But we’re hoping that he’ll be in and doing a lot more movement training and build that up. Hopefully we’ll have him back for the end of January / start of February.

Dec had a small operation on his chest to remove a cyst. It’s an open wound at the moment. So until that’s healed, he’s not able to take part in any contact games.

Our Chairman spoke to The Scotsman this passed week with his thoughts over COVID restrictions and football. You can read all about it HERE. 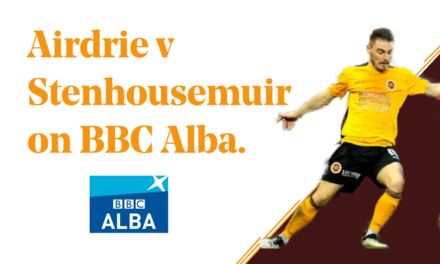 Stenhousemuir secure Botti to the end of the season 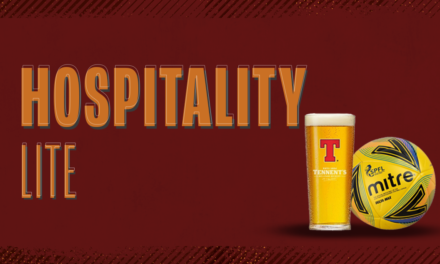 New additions to the squad