Michael Miller makes the switch to the Warriors

This week you will have noticed that we have completed yet another summer signing as we added Michael Miller to the squad. Michael joined on loan from Ayr United until the end of the season and made his debut against Cove at the weekend.

The defensive midfielder began his youth career at Celtic, spending a short time on loan at Dumbarton in 2014. In June that same year, Miller was released by Celtic and signed for Greenock Morton on a one-year contract. Miller scored his first goal for Morton as they defeated Peterhead to win the League One title in May 2015. At the end of the 2015–16 season, Miller signed with Livingston.

After leaving Livingston, Miller joined Brechin City during the 2018–19 season, and made his league debut on 9 March 2019. After a season with Raith Rovers, Miller joined Ayr United in 2020. Miller also made appearances for Scotland at under-18, under-19 and under-20 level in 2012 whilst at Celtic. 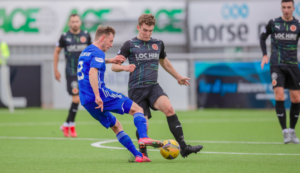 Back on Saturday, the Warriors received a break from league duties as they made the long journey north to the Balmoral Stadium to face Cove Rangers in the SPFL Trust Trophy. The boys were under no illusions about how tough a test our hosts would provide given their positioning at the top end of League 1, however were very much in the mood for a classic cup encounter.

The Warriors started well and ensured that they were competitive during the cagey opening stages of the match and we came close in the 7th minute as Cammy Graham’s effort from just inside the box was struck with power but was dragged wide of the near post.

Both teams then exchanged minor half chances before, on the 16th minute, the Warriors so nearly took the lead. Forbes’ expert long ball down the right was picked up by Ross Lyon who’s cut back was controlled by Orr inside the box before the striker fired a low effort across goal which rebounded off the far post with the keeper beaten.

As if the pain of coming so near to scoring wasn’t tough enough, the Warriors hit the Cove woodwork again in the 26th minute. On this occasion, Forbes was pulled down just outside the box on the right hand side, allowing him the opportunity to attempt one of his trademark freekicks. His effort had McKenzie beaten in the Cove goal, however the ball bounced off the crossbar and away from danger.

Our hosts then rallied and began to dictate more of the play. They had a significant chance of their own on 34 minutes as an excellent passing move saw a dinked ball played in behind to McAlister who then knocked it down for Masson, only for the attacker to pull his shot wide of goal from only 10 yards out.

Only two minutes later Cove came close again as Megginson slipped in McIntosh on the right hand side before the winger drove into the box and through on goal. However despite his best efforts to score, David Wilson was able to make himself big and pull off the save in the 1v1 to preserve the clean sheet.

Into the second half the Warriors remained competitive, however it was our hosts who were creating more chances and looked on top. Despite this, they had to wait until the 62nd minute to create a real clear cut opportunity. Fyvie latched onto a loose ball in front of the Warriors backline and slipped Megginson through on goal but once again it was Wilson to the rescue by making the block.

Cove continued to dominate the ball and put pressure on the Warriors defence, however the boys withstood it brilliantly to preserve their clean sheet. We threatened occasionally on the counter throughout the half but without creating any clear cut scoring opportunities.

The match finished 0-0, which is not a bad result for the Warriors playing away from home against a side 16 placings above them in the league ladder. However this was not the end of proceedings as the two sides had to be separated and as is procedure in the SPFL Trust Trophy, this was to be done by means of a penalty shootout.

The Warriors were to take first as Ross Forbes stepped up and struck his penalty off the crossbar to the delight of the home supporters. This allowed McAlister to give Cove the advantage by scoring his penalty to make it 1-0. Coll was next up for the Warriors but he also failed to score as McKenzie guessed the right way and made the save. Yule then fired past Wilson to make it 2-0 and really put Cove into the driving seat. The pressure was then piled onto O’Reilly who realistically had to score to keep our hopes alive and he did just that by sending McKenzie the wrong way to make it 2-1. Despite this, Leitch converted Cove’s next spot kick to preserve their 2 goal lead. Brown then scored to make it 3-2, however if Cove scored their next penalty they would win the tie. This job was left to Mitch Megginson who made no mistake to wrap things up at 4-2 to Cove on penalties.

In the end it was our hosts that progress to the next round of the cup to face Albion Rovers, however the Warriors can take a lot of pride from their performance which saw them draw away to a very strong opposition. All attention now turns to a massive League 2 encounter next week against Annan Athletic. 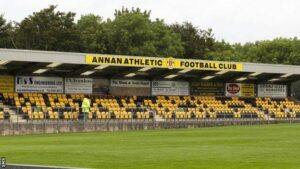 This Saturday, the Warriors return to league action as we travel down south to face Annan Athletic at the Galabank Stadium. There is no doubt that our hosts will provide a stern test, however with the Warriors still remaining winless in the league, it is a massive fixture for the boys.

Annan head into this game in fine form, having won 4 on the bounce in the league, a run which has seen them climb to second place, only a point behind leaders Kelty. Despite the Warriors poor run of form, the boys will take some confidence from what was a strong performance against Cove in the SPFL Trust Trophy which saw them manage a draw in 90 minutes.

A win for the Warriors would not only boost confidence but also very likely take us off the foot of the table, depending on the Albion Rovers v Cowdenbeath result. Whereas a victory for Annan could see them go top if Kelty drop points against Elgin.

Tickets for this one are priced at £12 for adults and £8 for concessions, with all tickets having to be purchased in advance of kick-off via the FanBase app or website: https://fanbaseclub.com

Lastly, if for whatever reason you can’t make the trip to Annan but still don’t want to miss any of the action, then a pay per view stream is available courtesy of our hosts for £12, which can be accessed by following the link below:

A few weeks back the Warriors took on Ayr United in a SWF Championship South encounter which finished 1-0 to Ayr. However SWF have this week released a statement announcing that due to Ayr having played an ineligible player, the match result would be overturned and the Warriors would be awarded a 3-0 victory. This result now means that the ladies move up to 15th in the table. The full SWF statement can be read by clicking on the link below:

Back on Sunday the Warriors returned to league action as they hosted Hutchison Vale in the SWF Championship South. The ladies were hard to breakdown and were competitive for spells, however lacked a threat in the final third and made a few mistakes which were punished by the visitors. The result sees Hutchinson Vale move up to 5th in the table.

Please follow the link below to hear the post-match thoughts of head coach Allan Milne:

Next up – Edinburgh Caledonia (A)

On Sunday, the Warriors will travel through to Bonnyrigg to take on Edinburgh Caledonia in their latest SWF Championship South fixture.

The match is set to be a 6 pointer with both sides locked together on 3 points in the league table so far. A win for the Warriors would see them leapfrog Edinburgh and move as high as 10th in the table.

We’re adding to our media team! 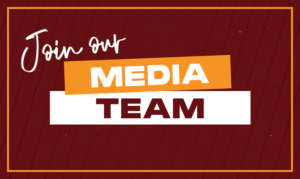 We have some exciting opportunities available to join the Stenhousemuir FC Media Team.

The club is seeking applications from highly motivated, knowledgeable, and skilled individuals who wish to pursue a career in the media and within sport.

Working alongside the Head of Media and Media Team, you will play an important role in developing the clubs brand, marketing plan and media relations. The successful candidates will perform weekly tasks and responsibilities associated with the positions below.

The roles are voluntary and would ideally suit a student undertaking a qualification within a media or sports field.

We are looking for volunteers in the following positions;

We are always looking to grow and enhance on our team, so if you feel that you could contribute to the team in areas that are not listed above, feel free to contact us and we can have a chat.

To apply, simply send a cover letter detailing your vision for your chosen role to Ian.fitzpatrick@stenhousemuirfc.com

We are pleased to confirm that our August winners of our Community Sports Lottery have been announced! Please follow the link below to see who won what and also how to sign up for your chance to win: 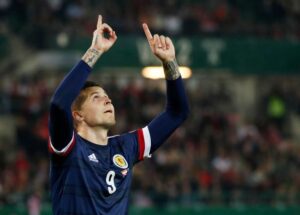 How far are we from the world cup?

I’m sure we’re all still on a high from Scotland’s massive victory on Tuesday night away to Austria. But how far away are we from qualification to the World Cup in Qatar next year? Please follow the link below to read more:

Who is the greatest player of all time?

Who is the best player to ever play the game? Its an age old question that is sure to divide opinion. However this week, leading mathematician Dr. Tom Crawford of Oxford University claims to have statistically ranked the 10 best players to ever grace the game. Please follow the link below to find out more:

You will likely have seen the scenes this week from Brazil as public health officials stormed the pitch to confront certain Argentine players over their quarantine status and right to play in the game. Now FIFA have announced that they are investigating the incident. Please follow the link below to read more: