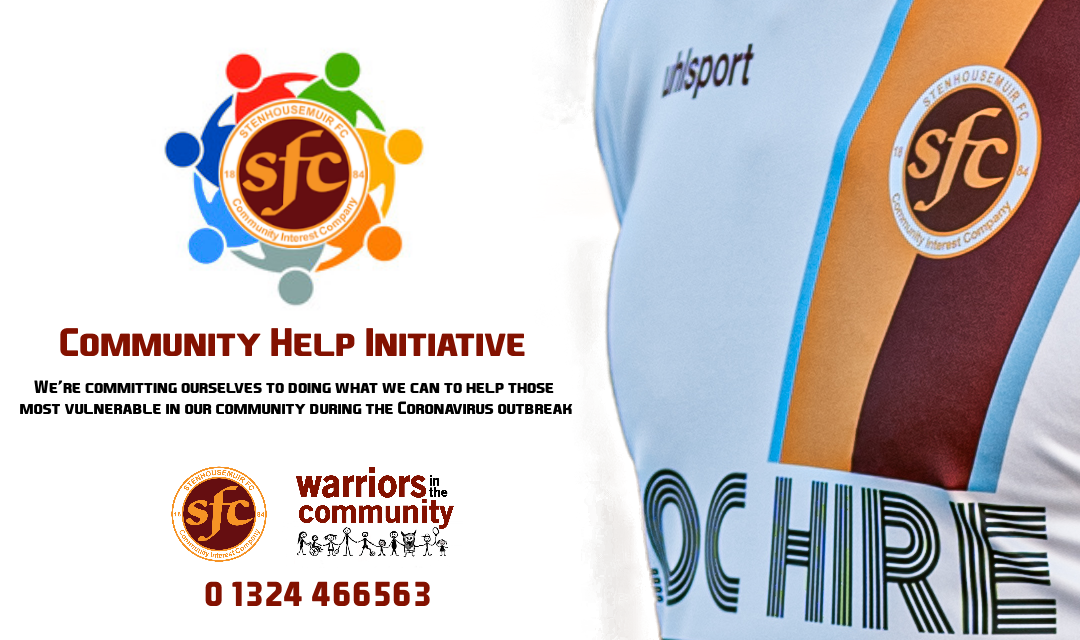 Larbert & Falkirk 41 Club Back The Warriors

Stenhousemuir Football Club is pleased to confirm it has received a donation from Larbert & Falkirk 41 Club towards the Warriors Homemade Meals Initiative. The Clubs is now making and delivering 200 weekly meals free of charge to some of the most vulnerable people in the community. This is the latest addition to the Clubs Community Help Initiative which is now entering its 7th week of operation.

The meals delivery service was made possible thanks to the support of Larbert Round Table who provided a donation to cover the costs of the first 4 weeks of the initiative. Following on from a successful first 2 weeks the Club has now received a second donation from Larbert and Falkirk 41 Club members which will help to extend the scheme for another 2 weeks.

The club aim is to support the work of their two round tables (Larbert and Falkirk) by assisting with Christmas Float collections and attending charter dinners.

The club meet once a month and aim to provide a varied programme of leisure activities and informative evenings either inside or outside and since 2014 have held an annual event to raise funds for good causes.

Since 2015 the events have grown in popularity with each passing year. A race night, a quiz night, a games night and ceilidh had raised approximately £13,000 for Falkirk & District Association for Mental Health, Strathcarron Hospice and Muscular Dystrophy UK  however, in 2019 our Abbamania event attracted 250 guest raising £7500 for Teenage Cancer Trust and Childrens Hospices across Scotland (CHAS).

Several member of the club have participated in 3 charity cycles since 2014. In 2015 they cycled 600 miles from Falkirk to Lands End in 5 days raising £18,000 for Anthony Nolan, In 2017 they cycled 380 mile cycle from Malin to Mizen in Eire raising £22,000 for Prostate Scotland and Breastcancer Now and in 2019 they cycled 420 miles from Chester to Chepstow around the coastline of beautiful Wales raising £23,000 for Alzheimer Scotland.

The club were delighted to be awarded the National 41 community services club of the year for 2019-2020.

‘When chairman David Archibald of Larbert Round Table told us about the fantastic work being carried out by Stenhousemuir Football Club we wanted to help. We agreed to donate a month of our club subscriptions which will provide additional financial support to the project during these unprecedented times’.

‘On behalf of the Club I wish to thank David Archibald from the Larbert Round Table and Richard Donaldson from Larbert & Falkirk 41 Club for their fantastic gestures of support. With their assistance we have been able to deliver over 350 free meals over the last 2 weeks with a further 204 meals ordered this week. The feedback we have received from those benefiting from the service has been overwhelmingly positive. The Round Table has been a long-standing partner of the Club and a key community organisation for many years. They are once again providing valuable support to people in our community and we are delighted to collaborate with them on this very worthwhile service’.