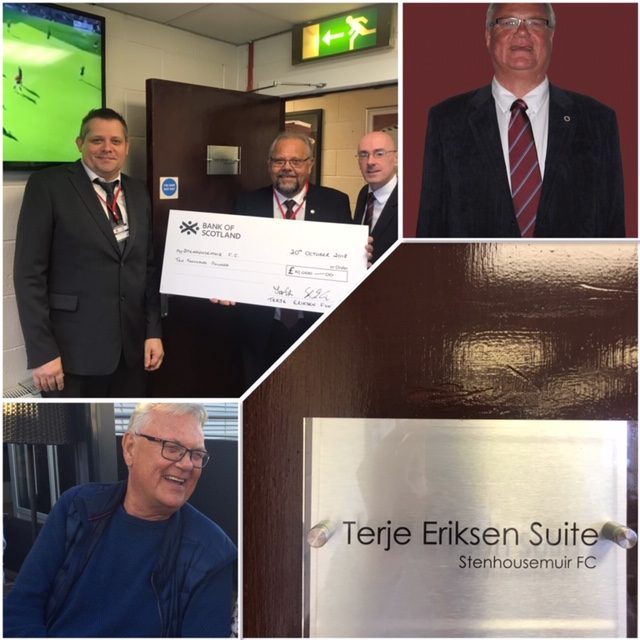 Terje Eriksen’s memory lives on at the club

Stenhousemuir Football Club broke the new on Saturday that the club has officially renamed the Viewing Gallery after Terje Eriksen who sadly passed away earlier this year. Terje was a much loved friend and an Honorary President of the Club and is sadly missed by all.

His association with the club started in the mid 90s and he made new fewer than 54 trips from Norway to Scotland to see his beloved Warriors. He was a larger than life character capable of bringing joy and laughter to any room and will be remembered fondly by everyone who had the privilege to meet him.

We are therefore delighted to confirm that his legacy will last for many years to come at Ochilview with our newly named Terje Eriksen Suite.

His positive impact on the club however will not stop there due to a generous gift from his brother Ivar Eriksen. Ivar knew how much Stenhousemuir FC meant to Terje and has offered £10,000 to set up a fund in his brothers name for a 5 year period. This fund will be used to provide one young player a season with the opportunity to sign for the club and become a member of the first team squad in Terje’s name. We will hold ‘showcase’ training and matches for aspiring 18-21 year olds next summer with one lucky player then selected to sign a professional contract with the club for season 2019-20. The club will match the donation each season with the fund planned to run for 5 seasons consecutively.

Terje will therefore be directly supporting the club for at least the next 5 seasons further extending his legacy. The club wishes to place on record its deep gratitude for this magnificent donation and feels it is a fitting tribute for a great man who was proud every day to be a Warrior.

We are very proud of our Norwegian Supporters and the immensely positive influence they have had on our club both historically and from an on-going perspective. We wish to thank every Norwegian supporter for their commitment, passion and support of Stenhousemuir Football Club.