Awards For All Funding – Girls Football

The A4A funding played a massive part in the growth of our Girls programme this year. This funding allowed me personally to visit a range of primary schools within the local area and offer them free girls only football sessions for P1-P7 pupils. The schools visited once I’d got the role were

Other local schools were also visited by our previous Girls Football Coordinator.

This was hugely beneficial for both parties, as working with a smaller number (only girls from the class) I was able to get more contact and interaction time with the kids. A frequently heard comment was ‘I’m so glad the boys aren’t playing, they never give us a shot’. Having the opportunity to work with just the girls in a smaller group of people allowed them to gain more touches on the ball and actually to start developing skills at their own pace. This meant the girls actually had the chance to make up their own minds to whether they enjoyed football, which the majority of them fed back that they did! This was even more obvious when delivering their second sessions a few weeks later: some girls coming in having practiced a skill they had learned in the last class or asking to play some of the games again, their confidence was increasing with each session.

This funding made a huge difference within our girls football programme at Stenhousemuir Football Club, with our numbers increasing during the year, as well as the quality of their play. If we are able to do something similar again, I would definitely look to continue with the primary school work; however also begin to do the same for 1st-3rd Year girls. I think this would again be a benefit to both parties! With women’s football continually on the rise, now more than ever, getting school visits, especially ones free of charge to try and grow the game in this country is pivotal. 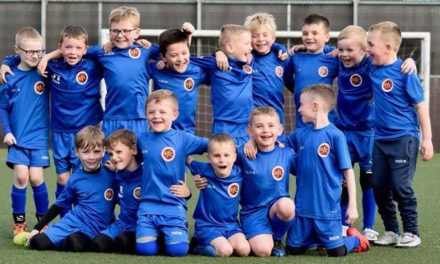