There was not to be a winning start for Bomber Ferguson who has taken on responsibilities of the first team, but despite the bitter pill of a late winner by Dunfermline it was still a positive day for the Warriors at East End Park, where they took a two-goal lead but eventually fell to the full time home team with the Stenny players running themselves into the ground in an effort to try to take, at least, one point.

“It was a really positive performance,” said Bomber, adding: “We said to the players in the build up one of the key things we are trying to do is to ensure that come the end of the game we have put in a performance we can build on for the remainder of the season and to do that we had to be organised, to be aggressive and to have belief when we are attacking and moving forward and I think we showed that. That was the most pleasing part.

“The manner in which we lost the game and the manner in which we lost the goals, certainly at the end of each half, they were the real disappointments but there is learning to come from that the players can take on. That is the downside but the positive side looking forward is that the level of performance was one that we were hoping to start with and we have started with it, the players need to build on that and we have the ability to do so.”

Bomber agreed that it is difficult playing against a full time team but felt there were other factors as well, saying: “That could be for a number of reasons, there is the full time part there, there certainly was an edge to the game because of what had happened, so there would have been a lot of adrenalin and these kind of things.

“I think if you had watched the game as a neutral you would have loved it, it was a ding-dong game and no slack was given by either side. I can only be proud of the way they went about there business but it did show the demands on them and that is something we can take into our training and make sure we are better conditioned for the latter stage of the season. But that was against a full time team who had the edge with support, at times, and I thought we dealt with it pretty well throughout the course of the game. We did not panic which was great.”

One of the most pleasing aspects was the number of good chances the Warriors created and Bomber noted: “Two goals away to Dunfermline is no mean feat and again you could probably count another four or five really good chances, we had 10 plus shots on goal and that was really positive.

“It was not as though we were just sitting there and hoping to try to nick something on the break or from a set piece, we were really effective with the game plan at times and to have that many chances was pleasing.”

Hopefully, Bomber will have a full squad to pick from for the visit of Airdrie on Saturday, he said: “There were a couple of players that came off with slight things but we have a 20s game tonight [Tuesday] which a few of the first team players are going to be in. Injury-wise it is too early to say if there is anyone who is a doubt but I think we should have a full squad and there are no suspensions at present.”

If Stenny can carry on from their performance at Dunfermline there will be high hopes of getting a result Saturday, although Bomber re-iterated his philosophy at aiming for performance first, saying: “I am very much a believer in rather than focussing too much on the outcome, we all know what we want, every supporter, every player knows what the outcome we want is what we need to know is how we are going to do it. So yes, if we can perform that way again and with the effect we did on Saturday I fully believe we will pick up more points that we will lose but we need to maintain that type of performance and that type of unity and structure to our play.”

There seemed to be a belief about the team Saturday that had been lacking and Bomber agrees it is an important thing, saying: “It is, the stats, the performance, the opinions of people there, everything we saw on Saturday shows we have got the ability to go and perform and I have never questioned that. We have got some really good players whilst others were standing up in areas where they needed to improve upon and we did that on Saturday and it is about maintaining that level of performance.

Hopefully the positive feeling between players and fans is something that is going to grow, it is certainly something Bomber wants to see and he knows that everyone has to play their part in developing this. To this end, he has suggested that there be a fans player of the match and this will take place for the first time this Saturday. More information on how to vote will be available in the Wee Bar before the game and the prize will be presented in the Wee Bar at about 5pm. 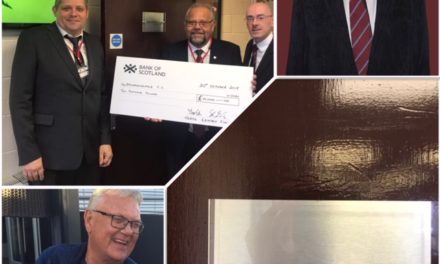