Scott Booth reflects on his first home encounter in charge Scott Booth promised a totally different game plan from the scoreless draw at Dunfermline and he and his team certainly delivered with a wonderful four-goal display against Brechin, with two scores coming inside ten minutes to give the Warriors command of the game from the start.

“It was really good, especially at the start of the game we went out at a really good pace,” said Booth. “The plan was to get a goal early, so we played with a lot of forward type players that could be dangerous and create something early on but by doing that we sacrificed a little bit in the midfield area. We took David Rowson out but that was partly tactical and partly that he has played a lot of games recently, so I thought it would be good for him to come out of it for a week, although we could put him on later to shore things up a bit if needed.”

After the flying start by the Warriors the game slowed and Brechin were able to pull a goal back, although it took a great strike to do it.

“We did catch them unawares at the start,” said Booth, “but then the game slowed down a little bit and because they had more players in the midfield area they started to use that overload quite well and they got the goal back. That made it quite tight for a while but overall I felt we were quite comfortable with the win.

“They took the goal really well but there is always a thing when a team score against you, there is always something you could have done to stop it, unless it was a complete wonderstrike. I thought we could have stopped the cross a little bit better and that is something we need to work on, getting closer to stop crosses but, realistically, it was a very good goal they scored.”

Stenny came out the better team again in the second half and this time, apart from a disputed penalty, they did not give Brechin much chance and, with a little luck, could easily have added more than two more goals.

“From then on we went well and we still looked dangerous,”said Booth, “late on John Gemmell came on with Kris Faulds and both did well and I was happy with the way they and the team played.”

Josh Watt played a big part in the win and looked confident and assured, despite being one of the younger players in the squad. His performance certainly impressed Booth, he said: “He is a good player Josh but he is a young player and I think there may be times when he looks as though he lacks a little confidence but he is a young lad, just coming into the game.

“It is not unusual when young players come in for them to be a bit inconsistent but I think if he plays regularly he will grow in confidence. He has certainly got some strong attributes going forward and he can play a more central or wider midfield role as well as an out and out winger and that is very positive.

“He is definitely one that I am happy with, he is one of the one of younger lads who I feel can improve.”

Improvement is something Saturday's opponents Stranraer will be looking for when the Warriors make the long trip to Stair Park. After seeing off second placed Dunfermline 3-1, the Blues have slipped to three defeats, conceding ten goals on the way.

However, Booth knows that they are still a good side and can be dangerous. “I am sure they will be looking to hit back, given that they have had three indifferent results and have let in a lot of goals,” said Booth. “Normally they are quite difficult to score against and they are very solid and work well as a team but in the last few games they have lost a lot of goals and it will be something they will be looking to put right.

“So, I would suggest they are going to be tougher and slightly more solid to begin with, to make sure they do not concede any goals. I think it has got the making of a really tight and difficult game against them.”

Whatever tactics Stranraer employ, Booth will be hoping to have prepared something to counter them, with game plans, rather than a game plan, being something he thinks vital.

“You have always got to have a solid game plan,” he said. “But you need to know if that does not work, where do you go next, or, if it does work, how do you take it on from there. You have to constantly keep doing that, you can't just keep coming up with one plan in mind.”

However, the starting plan is still the most vital, with Booth adding: “The most important thing is the plan you have to begin with is very clear and the players understand it and everyone buys into it.”

“We will look into a few things in training and over the two sessions this week we will put a plan in action and, hopefully, we will go there and carry on the way we have been playing and get the points again.”

The training ground in the last few weeks has been a place of learning for the entire squad and the manager is pleased with the way all of them have reacted. It has also been noticeable that the ideas Booth has been trying in training have come into play in match situations, they have not always worked perfectly but it is pleasing to see the players are ready and willing to adapt.

“That is good and it is down to the players,” said Booth. “They are still ready to learn and to take new ideas on board and I am really lucky to have players like that at the club, plus then you have the younger players as well and they obviously want to keep learning and progressing.

“The important thing is we work at it together, the players and the staff, then we are all in tune and we all know what we want, that gives us the best possibility of going into the game on a Saturday and utilising the things we have worked on."

Statement from the Board of Directors 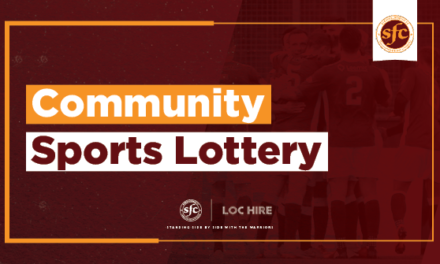