Club Chairman, Martin McNairney has been in contact with our Norwegian Supporters Club President, Georg Mathisen and Stenhousemuir FC, Honorary President, Terje Eriksen.
The Chairman was pleased to hear from Georg and Terje that as far as they can ascertain, none of our Norwegians supporters or their families have been affected by the atrocity which has taken place in Norway in the last few days.
The football club and it’s supporters wish to express their thoughts and offer their heart felt sympathy to our Norwegian Supporters and their fellow countrymen and women during this bleak time.
Our Norwegian Supporters Club was set up almost 20 years ago and has in excess of 100 members. It is one of the largest foreign supporter’s clubs outwith the English Premiership.

The Norwegians Supporters Club has sponsored the football club in many ways since their inception and currently sponsors the main stand, now called the Norway Stand. They have also among other things sponsored our Youth Programme and organised a pre-season tour to Norway for our 1st team in recent years. 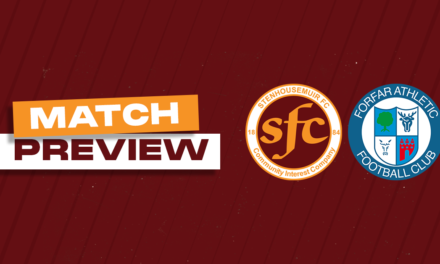