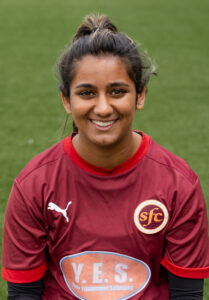 Nimi started playing football at age 8 in Coventry with Brinklow before she signed with Birmingham City U16’s at the age of 15.

Here next step was Leicester City where she joined the Under 18’s for a season then moved to Coventry United.

Nimi stayed with Coventry United until she started University and moved to Scotland, joining the Celtic academy in the process.

During her time with Celtic. Nimi helped the team reach the SWFL Cup Final before she moved to Glasgow Girls and Women FC.

During her time with Glasgow Girls, Nimi injured her knee and had to spend a season away from football. She made her return during the 2021/2022 season when she joined Rossvale Women.

For the cost of £60 you can sponsor a player and receive the following:

For further information on how to sponsor a player please contact: