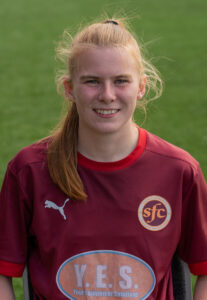 Erin began playing football in the street and at school from a young age!

She joined her first team Cumbernauld Colts FC at the age of 13 and she remaind with the team for 5 years, working through the pathway until she joined the ladies first team.

In 2018 the Cumbernauld Colts FC Ladies team folded so Erin joined Hamilton Accies Under 23’s squad for the season.

After a season with the Accies she joined St Mirren for a year before joining the Warriors in 2020!

Erin Wilson became a key player for the squad with the most starts and assists for the team in the 2021/22 season. Erin played 21 games, scored 6 goals and got 7 assists! She played 1812 minutes for the Warriors last season which was the second most minutes of everyone in the squad!

Erin took over the captains armband for the 2022/23 season.