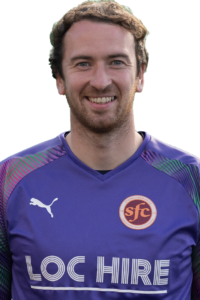 Conor Brennan joined the club in June 2022 and is a goalkeeper with the number 1 shirt.

Brennan made his senior debut for Kilmarnock in a 2–0 victory over Dundee United on 3 October 2014, after replacing injured Killie goalkeeper Craig Samson at half time.

In July 2015, Brennan signed on loan with Scottish League One side Stranraer on a six-month deal. He was recalled by Kilmarnock on 1 September 2015, after the club loaned fellow goalkeeper Devlin McKay to Derby County. On 23 May 2016, he was one of six players released at the end of their contract.

After leaving Raith, Brennan signed with NIFL Premiership side Ballymena United before returning to Scotland to sign with Greenock Morton on 18 January 2018.

During the 2018 close season, Brennan signed for Brechin City. He left the club in January 2019 and signed for Dumbarton. After impressing in his two appearances for the club he signed a new one year deal in June of the same year. He left the club in July 2020 after spending the 2019–20 season as the club’s number one and signed for Lowland Football League side East Kilbride. He finished the 2021-22 season by being included in the Lowland League Team of the Season.