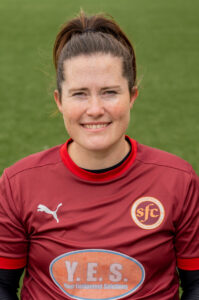 Clare began playing football at really young age with her brother, who claims to have taught her everything she knows! Due to the lack of girls teams’ at that time, she gained most of her playing experience at school playtimes, kicking the ball around with the boys.

During her transition to high school, Clare moved from Clydebank to Stirling where she found Dundee Ladies FC who were training at Stirling Rugby Club of all places. She trained hard and was given a chance in the Senior game when she was signed at age 12. Between the age of 14 and 17 Clare played for the Scotland Select Squads.

After a couple of seasons she moved to Falkirk Ladies FC where she spent the next 12 years, becoming a key player for the squad before spending 5 years as the teams captain.

Clare eventually left Falkirk and decided to take an extended break of 8 years from football when her kids came along before she signed and joined the Warriors at the start of the 22/23 season.

Clare is excited to be part of the squad and is looking forward to letting her kids see her being a footballer again!