Ahead of the new league season opening game at home to Airdrieonans on Saturday, I wanted to give an update on the various activites and changes that have taken place during the close season.

1st Team Squad – the manager has signed 20 players and is looking to add another couple of players before the transfer window closes on 31st August.

U20's Squad – the manager has signed 13 player and again is looking to sign another couple of players before the deadline. The rules allow 5 over age players to play in the U20 league.

Colin McMenamin is the U20's coach.

The league starts at the beginning of September so why not come along and look at our new signings as well as some of our young players from last season.

Technical Director – Robert Rowan has been in place for a couple of months now assisting the manager with talent ID, Scouting, recruitment and game analysis and identifying players for the Forth Valley Football Academy based at Stirling University.

Commercial Director – we are hoping to appoint an experienced individual to take this important area of the club forward.

New Pitch – a new 3G carpet has been installed which with the correct maintenance regime will last for at least 8 years. The carpet has a shock pad under it which meets the IRB22 requirements to allow Rugby training and matches to be played at Ochilview. The work has been mainly funded through a bank loan and grants.

New Changing Facilities – we are waiting for the contractor to complete some minor works which will allow this excellent facility to be opened for astro pitch and main pitch users.

Terracing Toilets – all the overgrown foliage has been removed to allow the roof to be resealed.

New Heating System – the old electric storage heating system has been replaced with a new gas wet system. There remains some connection work to be completed before the system is in use. This change will not only make the heating of the building more comfortable and controllable but will also save the club in running costs going forward.

Wee Bar – fans will find 2 new TV's installed and a new carpet in place as well as new floor coverings in the Ladies and Gents toilets.

Carpets – the top corridor and stairwells have a new carpet in place.

TV's – the Ormond Suite has a new TV and the Viewing Gallery has 2 new TV's.

Painting – the whole place has been painted inside and out. I'm sure Oscar is glad the season is starting so that he can put away his paintbrush!

On behalf of the Board, I wish to thank the staff and all the volunteers for there hard work in helping get this sustantial amount of work done prior to the start of the new season.

This is the start of a new era at Ochilview and the Board and I wish the Manager, coaches and the players good luck in achieving every success this season. 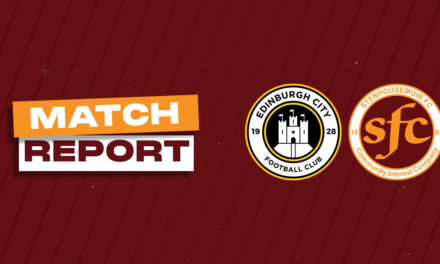