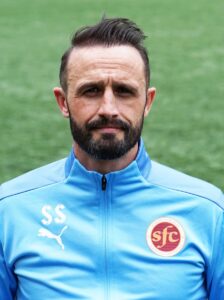 Swift began his career with Benburb with whom he was capped at Junior level for Scotland. After an unsuccessful trial with Motherwell, he signed for Livingston in 2000 on a delayed transfer, finally arriving at the club in 2001. A pacy right back, Swift was loaned out to Cowdenbeath, initially on a three-month deal, however the move was made permanent and the player departed Livingston without having made a first team appearance.

Swift left Cowdenbeath in 2002 to drop back to Junior level, joining Linlithgow Rose where he was re-united with his former Benburb boss, Jim Sinnet. Stepping back up again at the end of the following season, Swift joined Stranraer where the club won the Third Division championship in his first season, then followed that with promotion to the First Division a year later. He later played for Queen of the South and Ayr United before dropping to the Juniors again, firstly with Irvine Meadow with whom he won the West Region Premier Division, West of Scotland Cup and other honours and was in the Irvine Meadow team that reached the fourth round of the Scottish Cup in 2009–10 before moving to Pollok.

Swift was appointed co-manager of Kilbirnie Ladeside in March 2012 in partnership with ex-Pollok teammate Mark Crilly and assumed sole charge following Crilly’s resignation in February 2015. He led Ladeside to victory in the Ayrshire Sectional League Cup in October 2016 but resigned from his position the following month.[13] After a short spell coaching at Largs Thistle, Swift briefly resumed his playing career with Kilwinning Rangers before joining BSC Glasgow as their new manager in April 2017. On 27 April 2021, Swift was appointed manager of League Two club Stenhousemuir.