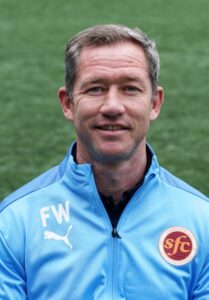 Born in East Kilbride, South Lanarkshire, Wright started his career with semi-professional club Stranraer. In June 2005, he joined Kilmarnock on a free transfer.

Wright quickly established himself in the Kilmarnock team, making 28 appearances in his first season at Rugby Park. He scored his first Kilmarnock goal in a 2–2 draw with Rangers in August 2006 and netted again the following month with an extra time free-kick in a 2–1 win against Livingston in the Scottish League Cup. He was on target again in the League Cup in November, scoring twice in a 3–2 win over Motherwell in the quarter-finals. These goals helped Kilmarnock reach the 2007 Scottish League Cup Final, which they lost to Hibernian.

On 3 June 2011 he left Kilmarnock to join fellow Scottish Premier League side St Johnstone on a free transfer. Wright made his debut on 23 July against Aberdeen on the opening day of the season.

He signed for Scottish Championship side Dumbarton on 26 August 2015. He renewed his contract for another season with the club in May 2016, scoring his first goal two months later in a 6–2 defeat to Dundee. After making just 2 league appearances for the Sons during the 2016–17 season, Wright was released by the club on 5 January 2017.

After his release from Dumbarton, Wright joined Stirling Albion on 6 January 2017. Wright joins his former defensive partner and current Stirling manager, Dave Mackay, as well as former St Johnstone teammate Liam Caddis, all 3 of whom played at Saints together. Wright announced his retirement from football at the end of the 2016–17 season.

Wright joined Lowland League side BSC Glasgow ahead of the 2019-20 season as a first team assistant coach to manager Stephen Swift.

Swift was appointed as manager of Stenhousemuir on 27 April 2021 with Wright joining as his assistant.