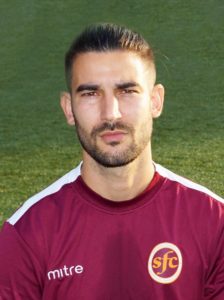 Jesus has signed a 1 season agreement wit h the club.

He plays in central defence and has previously played for Livingston, Hamilton Accies and Edinburgh City having played in excess of 120 1st Team games for these clubs and scoring 11 goals in the process.

Jesus will join forces with Morgyn Neill in central defence and add a lot of experience to our defence having played in 75 SPFL Premiership games in his time at Hamilton.