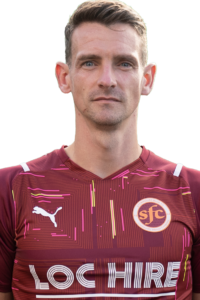 Craig Bryson joined the club in June 2022 and plays in midfield. He has been assigned the Number 13 jersey which he wore as a double cup winning player with St Johnstone.

Bryson began his career at Scottish First Division club Clyde, for whom he made his professional debut in 2004. He moved to the Scottish Premiership with Kilmarnock in 2007 before being bought by Derby County in 2011. At Derby, Bryson twice won the club’s Player of the Year Award – in 2012 and 2014, was named to the PFA Championship Team of the Year in 2014 and became the first Derby player to score a hat-trick against fierce rivals Nottingham Forest in 116 years, when he did so in a 5–0 win in March 2014. Bryson was loaned to Cardiff City during the 2017–18 season, and left Derby in 2019 to sign for Aberdeen.

Born in Rutherglen, Bryson began his career with non-league side Westwood Rovers. He signed a professional contract with Scottish First Division club Clyde at the beginning of the 2003–04 season. He turned down the opportunity to sign for Scottish Premiership club Motherwell because he wanted to play regular first team football and he didn’t feel that he would get that at Motherwell. He didn’t make a first team appearance that season, but was loaned out to junior outfit East Kilbride Thistle for the latter part of the season. He made a big impression in his time at East Kilbride, scoring two goals in eight league appearances and winning the club’s Young Player of the Year award.

During the 2005–06 season, Bryson scored goals against both halves of the Old Firm. In September 2005, he scored Clyde’s equalising goal against Rangers in a Scottish League Cup tie at Ibrox Stadium, in a 5–2 extra time defeat. In January 2006, Bryson scored the opener in the famous 2–1 Scottish Cup win over holders Celtic, the game in which Roy Keane made his Celtic debut. Bryson nodded the ball into an open net to make it 1–0 after a cross from Eddie Malone evaded the Celtic defence. The win and his performance brought him to prominence and he was subsequently linked with moves to Celtic and Tottenham Hotspur and was called up to the Scotland under-21 side.

Bryson signed for Kilmarnock in July 2007 on a free transfer ahead of the 2007–08 season. As he was under the age of 24, Kilmarnock had to pay Clyde compensation, which was agreed upon between the two clubs in September. Bryson started 16 league games and came on as a substitute in 3 more, making his league debut for the club as a 71st-minute substitute against St Mirren on 22 September 2007. He almost scored in the 88th minute, but his powerful shot was well held by St Mirren keeper Chris Smith and the match finished 0–0

At the end of the 2010–11 season, it was reported that Brighton & Hove Albion, Derby County, Hull City and Leicester City were interested in signing Bryson, with Derby the favourites to sign him and Bryson himself only interested in moving to Derby. After Kilmarnock rejected two bids for Bryson from Derby, on 4 June 2011, it was confirmed that the two clubs had agreed a fee. Bryson signed for Derby on a three-year contract on 9 June, which went through on 1 July following the re-opening of the transfer window. The fee was speculated to be £350,000, rising to £450,000 after add-on clauses. Derby manager Nigel Clough called Bryson a “tremendous signing” and “a leader on and off the field” with “energy and ability in abundance”.n 1 January 2013 after picking scar tissue on his hamstring. Bryson returned to the team in mid-January and despite picking up a re-occurrence of his injury in early March, Bryson soon regained his place in the side and his performance alongside midfield partner Jeff Hendrick in Derby’s 3–0 win over Bristol City on 29 March earned them both praise from first team coach Andy Garner. Bryson was named the 84th best player in the 2012–13 Football League Championship by the Actim Index and it was confirmed in May 2013 that the club were in talks to extend his contract at Pride Park, with Bryson signing a new three-year contract later that month.

Bryson’s Aberdeen career was hampered by injury, playing only 6 games at the start of the 2019–20 season due to an ankle injury.

In August 2020 he was one of eight Aberdeen players who received a suspended three-match ban from the Scottish FA after they breached coronavirus-related restrictions by visiting a bar earlier in the month. On 9 September 2020, Bryson departed Aberdeen via mutual consent.

A week after leaving Aberdeen, Bryson signed with St Johnstone on a contract to the end of the 2020–21 season. Bryson would enjoy success with St Johnstone, lifting both the Scottish League Cup and the Scottish Cup in the 2020–21 season. In December 2021 however, Bryson would suffer an ankle injury against Celtic which would require surgery and end his season.

Bryson was capped by Scotland at under-19 and under-21 level while with Clyde. He was called up for a Scotland B match in 2009 but was later withdrawn at the request of his club manager Jim Jefferies.

On 16 November 2010, Bryson made his full international debut as a second-half substitute against the Faroe Islands at Pittodrie. Bryson’s form for Derby saw him recalled to the squad for a friendly against the United States in May 2012, but he did not play. In 2013, Bryson was recalled to the senior squad for World Cup qualifiers against Belgium and Macedonia in September and Croatia in October, but did not get any match time.

He started a friendly against Norway in Molde on 20 November to gain his second cap for his country. He was also called up for a post-season friendly against Nigeria, but while Derby teammates Chris Martin and Craig Forsyth made their debuts, Bryson did not come off the substitutes bench.