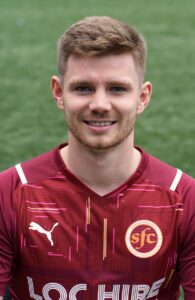 Ryan signed for the Warriors from BSC Glasgow. The 23 year old striker adds a further option for the team in the attacking third. A Hamilton Academy graduate, Ryan had spells at Airdrieonians and then Edusport in the Lowland League before making the step up to league 1 in 2019 to play for Dumbarton. After a season at the Sons, Ryan signed for BSC Glasgow and will now link up with former boss Swifty at Ochilview.