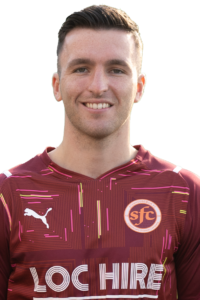 Michael Miller joined the club on a permanent deal from Ayr United following a successful loan period last season. The midfielder has retained his 24 jersey from last season.

Miller began his youth career at Celtic, spending a short time on loan at Dumbarton in 2014. In June that same year, Miller was released by Celtic and signed for Greenock Morton on a one-year contract. Miller scored his first goal for Morton as they defeated Peterhead to win the League One title in May 2015.  At the end of the 2015–16 season, Miller signed with Livingston. Miller was released by the club at the end of the 2016–17 season.

After leaving Livingston, Miller had an unsuccessful trial spell at St Mirren. He joined Brechin City during the 2018–19 season, and made his league debut on 9 March 2019. After a season with Raith Rovers, Miller joined Ayr United in 2020.

Miller made appearances for Scotland at under-18, under-19 and under-20 level in 2012 whilst at Celtic.