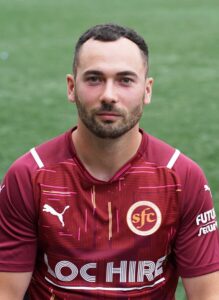 Ross joined the club in May after working with Stephen Swift at BSC Glasgow.

Predominantly a right back, Ross’ ability to move into a midfield role was one of the reasons that he was brought to the club.

He came through the Rangers Academy where he has returned as a coach. He also helped Clyde secure promotion from League Two in 2018/19.