Our recently formed girls only under 9 squad took part in their first ever festival at Vale of Leven Academy, Dumbarton,  today and are already looking forward to the next one which we hope to host at Ochilview.  7 teams from across the Central Region took part and each of the matches were terrific with lots of goals, dribbling, passes and most importantly – smiles. Jamie Kirk, Community Development Director, went along to watch the girls play and had this to say about the festival "I'd like to thank Dumbarton United and West Dumbarton Leisure for their hospitality at what was a very well organised event.  I'd also like to thank Kerry Kennedy, at the Scottish FA for all her hard work and support as we look to contribute to the growth of the girls game locally.  It's fantastic to see the enthusiasm of our young players and there were some amazing skills on show from each of the girls.  Charley, Grace, Erin and Emily all worked hard and came off the pitch with a smile on their face which is exactly what we love to see". Lauren Dickson, Girls Project Coordinator, added the following highlights from the matches "There were so many examples of great play during the day its hard to mention them all, but I've picked a few of my favourites.  Towards the end of the tournament Charley still had the energy and enthusiasm to beat three opposing players before a cool finish which was great to see.    Erin showed fantastic work rate in pressing the ball when playing as the striker and is starting to really come out of her shell within the team.  Emily's passing was terrific, very rarely losing possession and also added some new turns and skills to her game as the festival progressed.  Grace has shown she has a great turn of pace and was always keen to use her skills to take on a defender, often finishing in the corners of the goals when shooting.

The girls programme at Warriors in the Community is growing all the time and we are still looking for girls to play in our girls young maroons and under 9s, under 11s and under 13s teams.  For more information contact Lauren at community@stenhousemuirfc.com or call the office on 01324 562 992.

Warriors in the Community – Job Vacancy 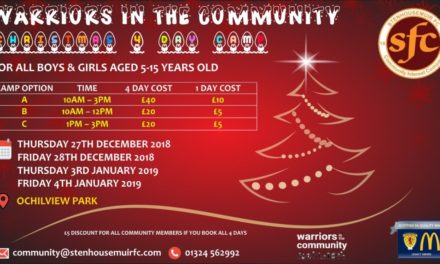